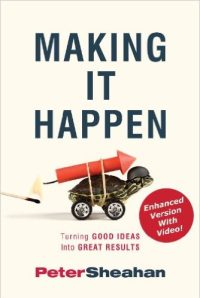 With a title of Making It Happen you might expect that the book is all about execution. How do you get the idea converted into action? At some level this is true, it’s about making ideas happen. However, at another level, it’s not. It’s less about execution and more about converting the good idea into something that you can sell. This is a marketing book. However, it’s not a marketing book in the same sense as Guerrilla Marketing, or The New Rules of Marketing and PR. It’s a marketing book in terms of how do you market your product through understanding and focusing. Making It Happen drives this further to talk about how to leverage your market offering once you get it refined.

Making it Happen has five main steps, steps that lead to the refinement of a single market proposition to the point that people will buy it and then on the other side an expansion of the idea into other places where you can have market impact. In addition to the five steps the book is littered with suggestions for how to refine your messaging and that’s focused on two main categories – the things that you’re offering and the people that you’re offering it to. We’ll cover those after the five steps.

Sheahan’s story about focus, is about how the fire from an acetylene torch is used to cut metal. A big yellow flame looks pretty but it’s not nearly as useful as a small focused blue flame. If you want to cut through you’re going to need the focus of the blue flame – that’s a focus that’s surprisingly hard to get to.

Many ideas never get refined enough to really penetrate the market in a meaningful way. Part of that is the natural resistance to exclude audiences for your offering. The thinking is that the fewer people you include in your offering the fewer deals that you’ll get. This may – or may not – be the right thinking. Observationally, if you’re not breaking through with anyone on a broad message it may be worth focusing the message to a set of people that you can influence.

When there’s an offer there are two components. The first component is the people you’re making the offer to. The second is the thing that you’re offering them. The thing may not be a physical thing – it may instead be a service offering or simply consulting time. However, in this context it’s separated from the person that you’re selling to.

When it comes to refining the message for your “thing” there are three pieces:

Let’s take a look at these individually.

It may seem obvious but knowing what you’re offering is a critical component to selling. The more vague, imprecise, or unclear the actual offer the less chance you have to penetrate the audience that you’re trying to sell to. Despite this and lots of sales training that encourages folks to have an “elevator pitch” or “back of the business card” answer to what they do and what they sell, most people can’t adequately describe what they do. One more palpable test is can you explain to your best friend’s wife or girlfriend what you do? If you can’t, you don’t have a refined enough offer.

As humans we are pretty dumb. I mean compared to the other creatures on the planet perhaps we’re smart but we seem to think that we evaluate everything. However, the cognitive reality is more that we try to find neat boxes that we want to put things in. If we can’t put an offer into a neat little box we’re likely to not remember it. As sad as it is, the more unique you are, the less likely you are to be remembered. At the same time, if there’s nothing about your offer that’s distinguishing you won’t be remembered either. That paradox is at the heart of the problem with marketing. You want to be different, just not too different.

Sheahan believes that we can differentiate the offer based on: the offer itself, an intangible (what he calls X-Factor), price, quality, speed, brand, or “you.” Further he believes that the success to differentiation are: being proactive, basing actions on research, timing it right, displaying proof, staying targeted, and playing the game. Often we need to focus on how the buyer perceives our offer including what category they put the offer in. Once we know the category that a buyer puts our offer in we’ll need to know how to differentiate it from the other offers and how to communicate that differentiation to them.

Sometimes we can differentiate our product in positive ways such as customer testimonials and independent third party reviews which don’t require much work of positioning. Instead they require that we gain credibility in the mind of the buyer. The most effective way to do that is to connect with the person that they want to be and either demonstrate that people like who they want to be accept our offer – or that people who are actually like them use the offer.

Even though we’ve been focused on the things – the offer being made – there’s been an inseparable aspect of the way that humans think and the things that drive us. Sheahan talks about the personal aspects that drive decisions in terms of our drives, our identity, our audiences, and inciting action. Let’s look at each of these in turn:

Citing P.R. Lawrence’s work Sheahan states that there are four key drives for all people:

Lawrence’s division of drives is somewhat difference than other views that we’ve seen in the past like Dr. Reiss’ work in Who Am I? However, this may be a reasonable simplification for the purposes of attempting to market as the 16 drivers in Reiss’ work is a lot to try to process.

One of the challenges with the drives indicated above is the drive to bond. The problem with this is that taken to the extreme that would lead us to the idea that we don’t want to be different from others. And certainly there’s an aspect of our nature where this is true. However, conversely we’re often fiercely defensive of our identity and our need to be different and unique – which puts us at odds with our need to bond. Sheahan speaks of three views of ourselves – and six lenses.

I’ve spoken before about integrated self-images and how important they are to use. (See Beyond Boundaries, Compelled to Control, and Personality Types.) However, the integrated self-image is about how I see myself at different times. Sheahan speaks of how I see myself but also how I believe others see me and what I aspire to be. He states that it’s misalignment between these views that drives our desire to bond. These views – particularly the view of how others see me of the “boxes” from Bonds that Make Us Free, Leadership and Self-Deception, and Anatomy of Peace. It seems to me that the less that you are concerned by how you believe others see you the less likely you are to get trapped in the “box.” However, conversely, Sheahan speaks about how others see you can make a big impact in your influence on them – so perhaps there is some middle ground.

In my own life and those around me who I care about, I can tell you that there is a great deal of energy when these three views of yourself come out of alignment. When you believe that you’re not moving to the person you aspire to be and when you feel like others don’t see you as you see yourself, there is a great deal of emotional energy that can be used productively – or unproductively. Each of us has some level of disconnect in these views when seen from all six lenses which come from Banwari Mittal of Northern Kentucky University and are quoted by Sheahan.

In some parts of our lives we may be in total alignment about the views. Professionally, for instance, we may see ourselves as a successful accountant. Our friends and colleagues see us this way as well. If our aspirations are simply to be a staff accountant then the views are in alignment from that perspective. However, that’s just one aspect of our life. That’s just one lens through which we can perceive ourselves. When we look at the broader picture we may not see alignment in every area. Mittal’s lenses through which we see ourselves are:

Every buyer for our offer has a way that they see themselves and a way that they’re measured. A frequent challenge in dealing with people is in not focusing on how we measure our success but instead to understand how our audience – our buyer – will be evaluated for success. Sometimes those metrics align completely, and sometimes they do not. For instance, I was invited by a consulting firm to do a presentation to their prospect. I delivered a presentation that by all accounts was great. It helped the prospect understand the challenges and to some extent why they needed help. However, ultimately the customer didn’t purchase from the consulting organization. Clearly my metric of satisfaction with the presentation I did wasn’t aligned with the goal of my buyer.

When dealing with people it’s important to not just understand how they’ll be measured but to be able to communicate how they’ll be successful on their metrics. This would include what you’re going to do that will specifically move their metrics forward but also how you’re going to help them measure the success so they can communicate it. In Sheahan’s example the ultimate metric was the people who were registering for the conference where he was focused on satisfaction of the people in his keynote. That’s a big difference.

I often say in my business that I have only one real competitor. That competitor’s name is “do nothing.” That is I don’t find myself losing deals to other consulting organizations. I find myself losing to the client deciding not to take action because the problem is bigger than they expected, they have other more pressing priorities, or they just don’t know how to get started. (The final one is my failure to communicate how we can lead them through the process.)

Sheahan suggests that inciting folks to action means aligning the offering to an existing market need – or creating the market need. Having spent years around parts of the technology space where vendors were trying to build the market need, I can tell you that having an existing need is much easier. In both the mobile space and search engine market the development has been painfully slow because the vendors are trying to create the awareness in the market of the need they have. It’s not that there aren’t important problems to solve. It’s simply that the market doesn’t understand the extent of the problem and the value they can get by solving them.

If you’re struggling to figure out how to cut through the noise and make a difference, maybe you need to consider Making It Happen. It won’t tell you about the latest new social strategy, talk about search engine optimization, or anything specifically related to how to engage the market. It may, however, teach you how to focus your message to cut through and how to leverage your success once you have.