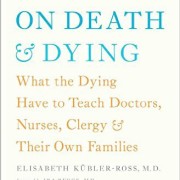 When my brother died, I experienced grief in a different way than I had in the past. I was suddenly in a situation that no one should ever have to go through – the death of a sibling. As a part of trying to process that my wife suggested that I read the classic book by Elizabeth Kubler-Ross titled On Death and Dying. It’s a classic because many in the medical profession find it as standard reading in their coursework. Kubler-Ross was a doctor working with seriously ill patients and she developed a model for how patients deal with the news that they’ll be dying. This model is often used by medical professionals as they attempt to help people cope with their own eminent death and the death of someone close to them.

The model is somewhat straightforward as it sees the process moving through five stages:

In each person the length of time in each stage is variable and it’s possible to move backwards through the stages just as you can move forward through them. However, at a high level the process is of someone moving through these stages.

So while the five stages above are the official stages, there is a recognition that there are some other things that occur as a part of the grieving process – they’re just not a part of the normal and sustained flow of processing the news.

Shock is the initial response. It’s what happens when someone dies – or when you’re told that you have a terminal illness. This response isn’t listed as a formal stage because it’s quite quick. Shock can only last a short time because of its very nature.

Similarly, there’s an overriding sense of peace and reassurance provided by hope. This isn’t to say that hope is denial – that the end won’t come – rather hope in this context is that there’s something more to come. This can be that there is an afterlife where the person who is dying will be reunited with their loved ones. This overriding hope can be that something good will come from what is happening perhaps in the context of a new cure to help someone else – or at least a better understanding of the disease to minimize someone else’s pain.

I believe that hope is the most powerful drug that we’ve been given on this planet. It’s free. It comes in convenient “thought” form so it can be transferred and administered easily. I’ve spoken numerous times about the placebo effect that doctors try to eliminate in studies and how powerful it can become. Most notability I spoke of the link between the placebo effect and hope in my review of The Heart and Soul of Change. The short is that finding a way to develop real hope that there is a bigger picture is powerful in helping people survive – and helping them die peacefully.

No one wants to believe bad news. Our egos are wired to believe that we’re great – that we’re at some level invincible. I mentioned a book – The Ego and Its Defenses – when I wrote my review of Change or Die. One of the 22 major defenses of the ego is denial. It’s no wonder then that denial is one way that we keep the reality of the situation from reaching us. The goal of denial is to protect us from something that our ego cannot accept like skipping a stone across the water. It helps us to “not let in” the reality of our own mortality.

The unfortunate thing about this is that our friends, our physicians, and the other people in our lives will continue to remind us of the reality of the situation. They’ll seek to help us move through our processing of the situation and to avoid getting stuck at denial. This can sometimes lead our ego to drive us into isolation as it struggles more mightily to avoid accepting the reality that we can’t process yet. The unfortunate thing about this is that we derive our strength and health through our relationships with other people (as I mentioned in my review of Change or Die.)

Here lies a delicate balance. It’s a balance between being present in someone’s life and allowing them to accept the normalcy of life while not accepting their denial. I know from my own experiences that simply being present and being willing to talk about any other topic is helpful and psychologically healing as it allows people to build the strength that they’ll need to move to the next step in the grieving process.

I mentioned in my review of Emotional Intelligence that the Buddhists believe that anger is disappointment directed. One of the most challenging parts of folks dealing with this stage of grief is that the anger is often misdirected and the targets of the anger are often random and change quickly. It’s natural for a caregiver and a loved one to become the target of the anger quite quickly. For instance, a doctor or a spouse may become the target of anger because they didn’t prevent someone from smoking and they developed terminal lung cancer. While the anger might more appropriately be placed on the person themselves the ego won’t allow that so it uses another one of its defenses, displacement.

Anger is often viewed as a negative emotion – however, anger is probably more accurately described as a powerful emotion. Anger can drive action. Anger can cause behaviors. Whether anger is positive or negative is really a function of the kinds of action – and specifically behaviors that it causes in someone. If anger motivates a person to write their memoirs – great. If it motivates them to go around throwing things and punching walls – well, that’s less great.

If your ego has managed to allow through the idea that death is eminent, the next step is that we’ll try to bargain. If we pray to God and agree to dedicate our lives to him then perhaps we can be spared this unfathomable outcome. We’ll try to persuade our physicians to try everything possible – including unproven approaches in the hope that we’ll be able to be spared the outcome that we so fear and dread.

It’s in the bargaining stage that patients use the phrase “do everything” to save them – or more commonly parents of a critically or terminally ill child will say “do everything” possible to save their life. However, the problem with this is that we often are willing to make the bargain before we realize the consequences.

Still bargaining seems like an effective approach for a while. Once it becomes clear that this approach won’t work, however, it is quickly abandoned.

Once death becomes fully real in the mind then depression sets in. The ego’s defenses aren’t limitless. They’ll eventually be exhausted. Depression is an indication that the defenses are gone – or are nearly gone. Depression is the first reaction of a mind that has become aware of the reality and gravity of the situation. A person here isn’t quite ready to accept their fate. They’re just more fully accepting of reality.

Depression can last right up to the final moments – as can any other stage. Depression is however close to a moment of peace. Helping folks through depression can be challenging but the results are very rewarding.

Though not everyone gets the pleasure of reaching the acceptance stage those who do are rewarded with a sense of transcendental peace. It’s not that they’re denying reality or that they don’t understand the meaning of death. Rather it’s that they’ve accepted that they cannot do anything to change the probable outcome. Unless a miracle happens – and that’s what hope is for – death will come.

When you’re not in the bull’s-eye of the death – meaning that it’s not your own – or in the inner ring – meaning it’s one of the few people who were closest to you – then what is your role in the death? (See Dunbar’s number for more about proximity and social connections.) The answer is to be supportive and to relieve some of the suffering. The question is how do you do that?

One component may be allowing for the person who is suffering to be where they are. In How to Be an Adult
Richio speaks about five things that we all need. Among these are acceptance – accepting the other person’s reality even if it doesn’t match ours – and allowing – permitting the other person to live their life without control. These are key skills when working with people who are struggling.

I’ve seen great pain caused by relatives and friends who aren’t willing to accept that a loved one is ready to die – or that they may even want to die. This approach – which I believe is driven by their pain – doesn’t demonstrate acceptance of their reality. Nor does it allow the other person to be as they want to be.

On Death and Dying provided one diagram which demonstrates so clearly how the stages aren’t linear that I felt compelled to reproduce it here: 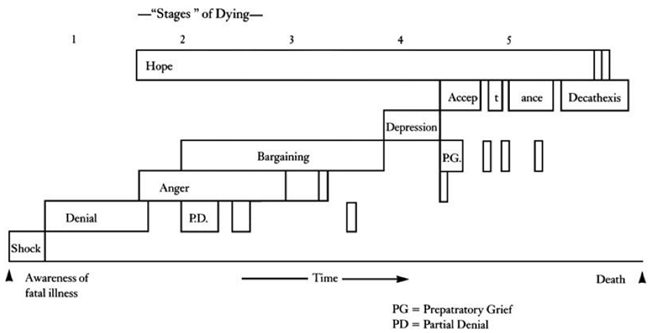 This shows how the stages generally flow – and how someone can alternate between stages.

If you’re interested in being more supportive and helpful to those around you who may be dying, perhaps you should read On Death and Dying.

Practical SharePoint Development for the Core Team and Beyond

Book Review-Chasing the Scream: The First and the Last Days of the War on D...
Scroll to top
%d bloggers like this: