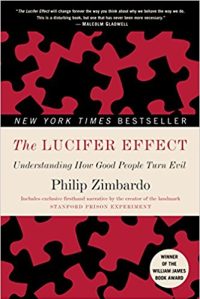 This is the second in a series of three posts about The Lucifer Effect. The first was The Devil Made Me Do It, and the final post in the series will be “Normal Evil“.

“The Rock.” It’s a short name for a tiny island in the middle of San Francisco bay that once served as a maximum-security prison. Even if prisoners escaped their cells, the water currents and relative distance of the shore meant near-certain death to anyone willing to attempt it. It’s not that people didn’t try to escape; however, their bodies were never found. As a result, the record of Alcatraz as an inescapable prison remains.

Alcatraz was a formidable prison. The “Battle for Alcatraz” attempted breakout, however, proved that, even if it was not escapable, it was possible for the prisoners to overpower the guards – at least temporarily. The real walls in the prison weren’t the ones made of concrete. The real walls were the ones that were created in the prisoner’s minds. The most troublesome and notorious prisoners called Alcatraz their temporary home and ultimately succumbed to the power of The Rock, a power that wasn’t expressed in its concrete structures, but instead in its relational power structures.

Lord John Dalberg-Acton said, “Absolute power corrupts absolutely.” It’s the structure of power that makes a prison run. If there are too few controls, limits, expectations, and monitoring, the power of the guards spirals up and the power of the prisoners down. The result is the temporary corruption of the guards into tyrannical monsters.

The Stanford Prison Experiment (SPE), as it came to be known, showed how minimal oversight and poor limits on guard behavior caused them to emotionally torment the prisoners. In the Abu Ghraib, the conditions weren’t simulated and the results were real. Much to the military’s disgrace, the conditions established at this and other prisons had guards doing unthinkable things to prisoners.

When the Geneva Conventions were removed by changing the status of the prisoners from prisoners of war to unlawful combatants, the safety valves were shut off, and the power of the guards was allowed to escalate to impossible levels. Add to this mixture of circumstances, poor supervision, and a severe lack of resources, and the power structure became unsustainably out of balance.

Even good men and women who had faithfully served their country began to disengage their morality (see Moral Disengagement) and do unspeakable things. Lord Acton’s statement had become all too real. These guards had been corrupted by the power that they held over other people’s lives.

Not every guard changes at the same rate. Not everyone’s moral beliefs and boundaries are bent, moved, or disengaged so quickly – but, ultimately, it seems that everyone’s beliefs are “adjusted.” Most frequently, the adjustments are in a failure to speak up. They’re not acts of commission, but are instead acts of omission.

To understand the power of the group and how hard it is to speak up for what’s right, we have to step back in time to 1955 and the work of Solomon Asch at Swarthmore College. Imagine you’ve been recruited with other volunteers to study perception. The challenge is easy. You’re there to compare the length of lines. One reference line and three possible lines, one of which matches the length of the first. You might expect this to be the sort of visual illusion test that is designed to test how we process visual information and some of the hidden flaws. (See Incognito for more.)

However, of the eight participants in each experiment, only you were a volunteer. The other seven people were confederates of Asch. They were there to see how you could be influenced by your desire for conformity. It turns out that, on a test that expected a very low error rate, 75% of the subjects gave at least one incorrect response when pressured by incorrect answers by the other confederates.

Instead of speaking up and giving the correct answer – one that was easy to identify – they gave an incorrect answer. The repetitions of the experiment, with the aid of fMRI machines, indicate that the areas of activation aren’t about conflict but are in areas of visual perception. This says that, literally, the person’s perception of the line was changed.

On Your Death Bed

If you listen carefully to the regrets of the dying, you’ll find, as Bonnie Ware did, that number three on the list is “I wish I’d had the courage to express my feelings.” She records this in The Top Five Regrets of the Dying. Everyone wants to know what they’ll regret most. Perhaps more interesting is that another variation of the regret of omission is number one on the list – “I wish I’d had the courage to live a life true to myself, not the life others expected of me.” That is, they regret that they couldn’t be themselves – to express themselves completely more frequently.

Back in the SPE, even the most morally-strong failed to speak out against the abuses that were happening. The prisoner who was on a hunger strike couldn’t rally the support of the other prisoners. Part of that was due to a lack of communication and rapport building, but at least some of it was tied up in the power of conformity. The Hidden Brain relates the story of the Belle Isle bridge in Detroit, where in August 1995, a woman was brutally beaten while people all around did nothing.

Malcolm Gladwell relates the story of Kitty Genovese in The Tipping Point. Kitty was stabbed to death. Thirty-eight people ultimately admitted to hearing her screams, and exactly zero called the police.

The morally-conflicted guards disengaged, performed small acts of kindness towards the prisoners, but failed to elevate their concerns either by confronting the aggressors or reporting the concerns through the chain of command at the mock prison.

The great lesson from the SPE is that to build a prison you need no walls. You need no bars. You need only those capacities within the human mind to succumb to group pressure and the lack of initiative needed to stand up and fight for what is right. President Franklin Roosevelt said it best: “Men are not prisoners of fate, but only prisoners of their own mind.” Perhaps the real prison is doing nothing to test the walls in our mind. Perhaps doing nothing is The Lucifer Effect.