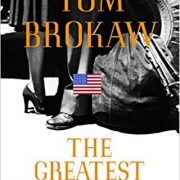 I’ve heard the stories – or rather I’ve heard the sensationalized stories – about how World War II came to be and how it ended. However, somewhere in the reduction done for history books, I missed the importance of the event. I don’t mean the importance to the world. I mean the importance to the men and women, to the families of those that served in the war. The Greatest Generation is Tom Brokaw’s tribute to a generation that openly faced some of the hardest challenges that our nation has ever seen. Coming out of the Great Depression and into the fire of war, this generation demonstrated what Americans could do.

Through story after story – some of them personal – Brokaw paints a picture of the values, commitment, and grit wielded by this great generation. Stories of mothers and daughters swapping roles between caring for young children and working outside of the home. Stories of entire families working to pool enough money to survive. Story after story of people helping each other to survive the harshness of the world.

Personal responsibility and accountability are at the top of the list of the values that were held by this great generation. They didn’t blame others for their success or failures. They didn’t whine that they didn’t have control. Certainly not everyone had the values and personal fortitude of the people that Brokaw interviewed; however, time and again, these great Americans would speak of how they didn’t earn medals, but rather they accepted them on behalf of others. This kind of humility wasn’t an outlier. It was woven into the very heart of how these servant citizens operated.

They were honest when it was difficult and hardworking. There was a sense of being connected to one another through our shared struggles. There was a common enemy so there was less fighting amongst ourselves. Consider the impact of the 2001 terrorist attacks. For a moment, there weren’t any Democrats or Republicans. There were just Americans. The greatest generation were Americans for their lives.

Today, we expect that we’ll be prosperous. This is a new expectation. It’s not one that the greatest generation held. They couldn’t imagine real prosperity. Having come through the Great Depression, they had seen suffering and want. They didn’t believe that they could avoid it. They worked hard to make sure that their basic needs were met.

Imagine choosing your career not because you liked it or it was interesting, but instead because it gave you an opportunity to help support the family. Retrospectively becoming a nurse may look like a conscious choice to be compassionate to the common man, but in the moment – at least in some cases – it was an opportunity to make much needed money for the family. We expect that employment is an option to us, but those who lived through the Great Depression were grateful for any work that they could get.

One of the darkest hours in the history of this great nation was when Executive Order 9066 was signed. It stole Japanese-Americans from their homes and interned them in camps. Families who were appalled by the Japanese government’s attack on Pearl Harbor were uprooted from their communities. This was a time of deep divides in American consciousness. In the South, African Americans were treated like second class citizens – but at least they weren’t interned in camps far away from their lives.

However, across the ocean, men fought together as men rather than against each other over their ancestry. No matter what your race or social group, when someone shoots at you, you’re all American. Such is the functioning of the human heart. When the bonds forged in the fires of war came back to the states, they weren’t enough to completely thaw the hearts of those who thought they were superior to others; but the seeds of equality may have been sown on those fields so far away.

Perhaps the most challenging issue faced by returning veterans wasn’t readjusting to a normal life. By all accounts, the men (and women) who came back from the war became the leaders that our communities needed. They became businessmen, community leaders, fathers, and friends. Many wouldn’t trade the lessons learned in war – nor would they give you anything to do it again.

The real challenge was when the morals of the country became more divided. Divorce became more common – and they didn’t know how to cope with it. They supported the services, but struggled with the war in Vietnam. They struggle at the lack of discipline with children these days.

There’s no way to talk about World War II without talking about the impact of the atomic bomb. One might wonder how a moral and ethical generation would process the use of two atomic bombs. The answer is surprisingly straightforward. They simply consider how many lives were saved – instead of the tragedy of the lives that were lost. That’s a fitting response from The Greatest Generation.