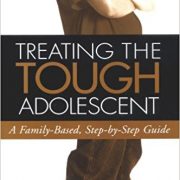 Not that counseling is ever an easy job, but some times are harder than others. Sure, you can help find folks find their calling or cope with death and divorce. You can handle the couple who are struggling to hold their marriage together. A good counselor can even help parents learn how to parent with authority and love. However, what happens when the children aren’t easy to get along with? What happens when they’re adolescent – and they’re tough? That’s where Treating the Tough Adolescent is.

Dr. Scott Sells wrote the book as a guide to help professionals know what to do in the uncharted territory of the difficult child. I’ve already reviewed his consumer/parent facing work, Parenting Your Out-of-Control Teenager: 7 Steps to Reestablish Authority and Reclaim Love. While there is substantial overlap between these two titles, the different audiences mean there is still more to glean from Treating the Tough Adolescent.

Before I get there, I need to remind you dear reader, I’m not a professional counselor. I’m a parent and volunteer who continues to seek to make the road easier for parents who are struggling with their teenagers, either because the teens are in trouble themselves, or because they’re trying to take over the family.

Every family operates together as a system. Sometimes the influences that one member of the family has on another are very large, and other times, not so much. However, families operate in relationship to one another. They’re like planets orbiting in a solar system with two (or more) stars. As one person moves and changes, so do the others. Everyone in a family system reacts to the gravitational pull of the other members of the system.

Family systems are particularly important when considering the impacts of a tough adolescent, because they were created somehow. It’s interesting to consider what the root causes are that created the tough adolescent in the first place. Was it dad’s addiction? Was it the mother’s mental illness? While there’s no point in assigning blame, looking for the root cause can sometimes melt the ice-cold heart of the struggling adolescent, whose only way of changing the system is to become “tough.”

No matter who or what caused the hurt, the teenager – and everyone in the family – must take responsibility for healing themselves. If the root cause hasn’t worked itself out and still lingers or is still a painful secret, then somewhere during the treatment of the adolescent, it will become necessary to address that root cause making it hard to recover.

One of the common dynamics that Sells identifies is that the adolescent has grabbed the reigns and is running the family. While this may seem impossible, it is the case all too often. Mom and dad may decide which house and which car, but the teenager controls the schedule and the emotional tenor of the house. They’re pulling the puppet strings of the parents, who feel powerless to resist the pull of their troubled and tough teen.

One of the continuous themes is the reestablishment of parental authority over the adolescent. This comes in two basic forms. The first form is obvious – that is, to take control back from the adolescent and control more aspects of the home. The second form is subtler and more subversively influences the system. By the time that an adolescent has been labeled as “tough” or “troubled,” it’s likely that they’ve already engaged other professionals, who left the parents less powerful than when they started. This, too, must be corrected.

When you reach out for help in an out-of-control situation, you expect to find competent help that will help you put your problems behind you. However, as I’ve brought up a few times, clinical psychology isn’t always doing its best work. (See Science and Pseudoscience in Clinical Psychology, The Heart and Soul of Change: Delivering what Works in Therapy, and The Cult of Personality Testing for more on some of the challenges in the profession.) The result of the engagement of external parties, whether it’s professional counselors, church, community, or law enforcement, wasn’t that the problem was stopped. Though for some, perhaps even many, these resources are able to halt the progression towards being a tough adolescent, in other cases, it isn’t enough.

It’s scary. Instead of worrying about the temper tantrums of a two year old, you’re worrying about oppositional defiance disorder and what harm the adolescent may inflict on themselves or on others. It’s no wonder that parents are desperate to get the help they need.

However, too often, the deferral to a professional causes the parent to lose ground in the eyes of the adolescent, because they are able to manipulate the professional into backing parents off from their stance, or the adolescent recognizes that the parent or parents aren’t able to manage them without help. If they can separate the parent from the help, they can win. It’s these cases where “helping” creates greater issues down the road.

This isn’t to say that parents shouldn’t seek help – they should. They should interview the helper and ensure they’re on the same page as the parents. If they can’t support the parents – both in their growth and in their ability to regain control – then they’re not the right fit.

Many times, tough teenagers didn’t have parents who could maintain these rules and enforce them. The cause – whether it’s a struggling marriage, a personal problem, or financial difficulties – is immaterial. The results are the same. Adolescents don’t know where the rules are. Without a clear definition of the rules and the consequences, there is no roadmap for how to behave, and testing the boundaries gets wilder and wilder.

Sells recommends a written contract with an adolescent so that they’re clear on what the rules are, how they’ll be interpreted, and what the consequences for violation are. His process includes a troubleshooting step specifically designed to help locate the loopholes that adolescents will undoubtedly attempt to try to wiggle through.

Walter Mischel tortured children with the thought of a marshmallow in the middle of the table. They were told to wait until the researcher returned without eating the marshmallow, and they’d be rewarded with two marshmallows. A pretty good return on the sweet tooth investment of a pre-kindergarten child. Some took the bait and ate the marshmallow before the researcher returned. Others didn’t. Those that ate it just couldn’t fight the feeling. They couldn’t muster the willpower. (See Willpower for more.) That’s not the interesting bit. Self-control is hard to come by whether you are two, ten, or fifty. The interesting part was the follow up. Those children who got two marshmallows were better off in life.

Tough adolescents are described as living the hedonistic life. They live for today and not for tomorrow. They can’t wait for tomorrow if they want it today.

One important point that Dr. Sells is able to reinforce is that even if tough adolescents can be brought back into control – and their behaviors kept to acceptable social norms for a while – there is a high probability of relapse. That is, the old behaviors will not want to be extinguished quickly. They may come up once in a while to see if the environment has changed and whether they can stick around. The recurrence of old, undesirable behaviors isn’t an indication of failure. It’s a normal situation, even if it’s not one that is welcomed.

Because of the potential for relapse (or the expectation of relapse), Sells recommends follow up to make sure that the hard-fought new interactions stick.

Sells’ work is more prescriptive than most books. He provides many excellent ideas for consequences that are both unexpected and potentially quite effective. There are bathroom lock-ins for those children who run away. For those who are absent or tardy at school, Sells provides a model for the parent attending school with the child. These creative consequences work, because they strike at the heart of the things that are important to the adolescent.

If your tough adolescent is important to you – or to one of your clients – perhaps the answer is to read Treating the Tough Adolescent.