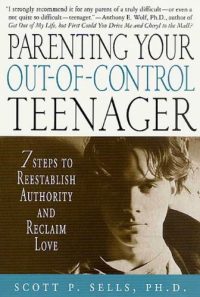 Parents pour so much time and energy into their children. They become the focus of their lives. From an evolutionary sense, it makes sense to have humans wired to take care of their children. It increases survival of the species. It might even explain the crazy cat lady who has 27 cats – and no children. Imagine the pain of a parent who has an out-of-control teenager. A child that you’ve poured resources in time, money, and emotion into for thirteen or more years who is out of control. This is the situation that sits square in the sights of Dr. Scott Sells’ work, Parenting Your Out of Control Teenager: 7 Steps to Reestablish Authority and Reclaim Love.

A key component of the title is the aspect of “out-of-control.” A key reality is that, over time, we must trade our control of our children for influence. We can put them in a play pen they can’t get out of when they’re young. It’s harder to keep control of them as they age. However, here Sells means something slightly different. He’s speaking of teenagers who struggle to fit into social norms, obey parents, and “make it” in life.

He’s talking about children where something has gone wrong in the development process, and something needs to be done to correct their course of action. This is a troubling situation. Judith Rich Harris speaks of the limitation of a parent’s ability to influence a child in The Nurture Assumption and No Two Alike. She holds out little hope for any parent’s ability to substantially shape their children’s path once the genetics have been set. While there are books designed with general parenting advice, they’re targeted towards those children who fall in the normal range. Parent Effectiveness Training and The Available Parent are both designed to tune up a parent’s skills when there’s a child with challenges – not necessarily one that is out of control. Similarly, Saving Our Sons and Raising a Modern-Day Knight are about how to raise boys with a greater connection and greater purpose.

Sells is dealing with different animal.

What Works When What Normally Works Doesn’t

Sells’ work started with teens for whom regular counseling solutions weren’t working. He studied eighty-two teens over a four-year period to develop a professional book, Treating the Tough Adolescent: A Family-Based, Step-by-Step Guide. He was looking to find a way to help save children who needed something they weren’t getting.

Like “normal” children, even out-of-control teenagers need both love and limits. It cannot be one without the other. Both ingredients are essential to the healthy development of a teenager. In today’s “friend first” culture of parenting, we often neglect the limits that are necessary for teens to learn the hard life lessons.

Conversely, in overly authoritarian environments without love, children struggle to understand that the world is really a helpful place and can become bitter and negative.

Sells believes there are seven top reasons for teen misbehavior:

As Sells is quick to point out, if you’re unwilling or unable to take charge, one of five things will happen; however, two of these are causes, and three are results. The causes are:

Sells believes that there are seven aces that teens attempt to play with parents to get their way. They are:

These aces are designed to cause the parent to back down and allow the teenager to retain their control. (You can learn more about the dynamics of control from Compelled to Control.)

One of the fears of a parent dealing with an out-of-control teen is that it’s getting worse. In a strange twist, it might get worse before it goes away. Behaviors are sometimes stronger before they’re extinguished. Here are the seven signs that Sells believes means it’s getting worse:

I believe that sharing stories about your experimentation can be helpful – but only in so much as they can establish some common ground. I believe it’s very easy for unskilled parents to go too far and share more information than is useful. They move from building common ground to establishing that, no matter what the teen does, it won’t be as bad as what the parents did during their experimentation. Also, it creates another potential opportunity for a teenager to use this information against the parent during a button-pushing competition.

So normal teenage experimentation is something to be met with understanding and conversations, not grounding for the rest of their lives.

Getting Clear and Getting Concrete

There are two major factors that allow out-of-control teens to operate. The first is the lack of clarity in what is expected of the teenager. The lack of clarity makes it hard for the teen to understand what to expect. The other issue is that the rules change. The parent doesn’t consistently enforce the consequences. This can be due to the parent forgetting the consequence that was associated with a behavior, a lack of willpower to follow through, or a lack of a practical way to implement the consequence.

Consider for a moment the idea that the teen would be denied access to their electronics. If they’re a latch key kid – coming home before their parents – how would you possibly prevent them from being on their phone or computer? There are answers to this, but they may be out of reach for some parents. Having an IT background means that I can snipe individual children’s devices off the network here and establish acceptable use times – but that may be beyond the technical capabilities of some parents. If you can’t enforce the consequence – if it moves – then it shouldn’t be a consequence. Teens will learn that consequences aren’t really consequences. They’re just a starting point for negotiation.

Both tendencies, to be unclear and to move consequences, are why Sells recommends having a written contract with your teen. Things should be as clear as possible – and there should be a sense of definitiveness about what the consequences are.

It’s important to realize that consequences really need to be harder on your teenager than they are on you. If you can’t sustain the consequence, then the teen will just wait you out – and know that they can do it again.

A teen’s behavior is just a part of the family system. It happens that teens act out as a result of unresolved issues in the family system that have nothing to do with the child. It might be parents that don’t get along – whether married or divorced. Attempting to get control of a teenager when the family system itself is broken doesn’t work.

(Sidebar: This was part of the reason that Terri and I worked with parents of troubled teens while others worked with the teens. You can see more about this in the Kin-to-Kid series of posts.)

In practice, the skills needed to navigate the turbulent waters of a conversation with an out-of-control teen may take more than any parent could reasonably be asked to develop. I’ve written about communication, conversation, and dialogue repeatedly, and I’m still out-matched with some of the conversations that we enter with our teenagers. (See Dialogue and Conversational Intelligence as starting point for more resources on effectively communicating.)

One specific skill that Sells shares is the use of the words he calls “reflectors.” These are words and phrases like nevertheless, regardless, that is the rule, or no exception. These are reflectors, because they get the conversation back to the issue at hand. For instance, if you told your son to sit up for a conversation, he might say that he’s tired. “Nevertheless, that is the rule,” can help him to recognize that his being tired doesn’t change the rule. (This presumes that this was a known rule.)

At the end of the day, parenting is hard work. Whether your children are two or in their twenties, parenting isn’t for the faint of heart. Having a difficult teenager makes it even harder. Sells shares some inventive and interesting strategies to help your teen understand that you mean business and that they must listen to you.

If you don’t have an out-of-control teenager yet, I’d still recommend that you pick up Parenting Your Out of Control Teenager, because it can help you be prepared when your child decides to test the waters. Maybe you can stop the process before it starts.