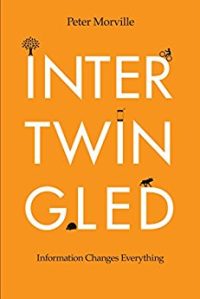 It might seem odd that one of the forefathers of information architecture would proclaim that everything is intertwingled and thus hard to force down into specific categories, but that’s what Peter Morville is saying. You can’t separate the parts from the whole. Intertwingled: Information Changes Everything is the start of a journey in realizing that, no matter how hard you try to cut apart, partition, chunk, and dissect, most things can’t be broken down without losing something. That won’t stop us from doing it, because we need to do it to simplify our world. However, it may change the way that we approach the process.

The vehicle in our journey is the ability to see everything as a system. There’s an old Tootsie Roll commercial where a jingle is played that ends with “Tootsie Rolls are all I see.” It’s a catchy tune that was designed to get people thinking about Tootsie Rolls, so they couldn’t forget about them. However, there’s some truth in life to this commercial. Once you see something, you can’t un-see it. It’s impossible to not know what a hippopotamus looks like after you’ve seen one. If you’ve learned to see things in systems, it’s hard to un-see them.

For Morville – and for me – everything is a system. It’s a system that can be manipulated, changed, and adapted often with unintended and inexplicable outcomes. Whether you realize that steel axe heads degenerated some aboriginal societies (as in Diffusion of Innovations), you got caught up in Peter Singe’s wildly popular The Fifth Discipline, or you stumbled across the posthumously published book Thinking in Systems by Donella Meadows, once you’ve been infected with the awareness that everything is a system of stocks and flows (inbound and outbound), it’s hard to not see it any longer.

However, just because you can see things in systems doesn’t mean you can predict outcomes. Gary Klein recognized that fire commanders build mental models of the fire where they could predict what is happening. Their Sources of Power may not have been consciously known to them, but they did know when one of their expectations generated by the model was violated, and it was time to go back to the drawing board and try to learn how the system was really functioning.

Fire commanders were strikingly good at predicting how the fires they were used to would behave. Their mental models worked. However, knowing how fires worked made them no better at predictions in other areas of their life. They didn’t even realize that they were seeing the fire as a system and simulating its facets – they were blind to the fact that they were even seeing the fire as a system. (Seeing What Others Don’t is another work by Klein which helps to explain how we develop the insights that fuel our mental models.)

Wireframes are a stock tool of a user experience designer and of the information architect. These wireframes form the boxes. They’re the pictures of what’s being built. However, what Morville and others have discovered is that it’s what happens between the boxes that is truly interesting. In Understanding Comics, Scott McCloud explains that the story in a comic book happens in the gutter between the frames. In effect, it’s the arrows between the boxes that gives the story its power. It’s what the user fills in themselves that helps the most.

Story is about connecting one frame with the next. That’s why storyboards are an even more powerful tool for designers than the venerable wire frame. Storyboards, which are often used in designing feature films (see Creativity, Inc.), connect the dots and reveal what’s hidden in plain sight in the way of the wireframes.

One of the criticisms laid at the steps of information architecture is that it reeks of “big design up front.” This is just the sort of waterfall-based logic that agile development teams launch scud missiles at. The problem is that too few practitioners of agile have read the Agile Manifesto or understand what information architecture is. They argue against documentation when the original founders of the agile movement were more concerned with ceremony and eliminating the waste caused by it. They didn’t want to eliminate documentation. They were focused on building and adapting instead of unnecessary documentation and unnecessary rigidity. However, there’s nothing in agile that argues against understanding what you’re doing. In fact, agile is focused on learning and understanding. The argument that agile levels against traditional waterfall (one-iteration) approaches is in believing in the planning fallacy – that you can plan through things ahead of time. (See How Will You Measure Your Life? for more.)

In fact, agile aligns perfectly with systems thinking, where you do something, observe the results, and then do something else. Sometimes you reverse (or try to reverse) the latest change. Sometimes you head off in a different direction. Ultimately, you’re always making small changes to see how things react, then adapting.

Information architecture – like software development – can take on characteristics of agile or traditional waterfall development. It all depends upon whose hands the tools are wielding the tools. There are some activities that require the development of non-intervention understanding. However, this is not always the case. Good information architecture recognizes that you won’t get it right the first time – or at one time. The needs of users to access content shift as attitudes and options change.

Our memories are fickle things. Our memories aren’t like video recorders accurately storing what happened. Instead, the memories become encoded and reduced into fragments and concepts that we can rearrange when we try to retrieve them. (See Science in Pseudo Science in Clinical Psychology for more on the fallacy of our memories.) Our memories don’t encode words. Instead, we encode concepts and ideas. When we retrieve the memory, we reconstruct the concepts using the words that we have in our current vocabulary.

If you don’t believe me, try to recall a conversation that you had when you were 8-10 years old. Recite the dialogue as you remember it into a recorder. Then go back and review the recording. You’re likely to find that your words weren’t words that you had in your vocabulary back then. Your memories were reconstructed with the help of your current vocabulary.

Even though we don’t remember words directly, words are deeply embedded into the way that we think. If you feed people negative experiences, you’ll get back negative words. One of the favorite parlor tricks of pop psychology is to listen for the Freudian slip. That is, when the truthful thing slips out from underneath the weight of polite society. Chris Argyris has an exercise of left and right columns, where the right column is what was actually said, and the left column is what was thought or felt. This exercise exposes how the words we use aren’t the words that we mean, and how these words can lead us down unproductive paths. (See Organizational Traps for more on the two-column method.)

Words are the way that we create the mental framing that we use for a problem. That’s why the words we use in our taxonomies are so important. They can conjure up the right ideas or ones that don’t connect with our audiences.

They’re called the badlands. Technically, this is a geological term referring to the erosion of clay-rich soil and softer sedentary rocks. However, the connotations of the term “bad” subtly influence millions of people to avoid these beautiful geological features. In this way, labeling an area as “badlands” on a map influences the visitors at Badlands National Park. The hidden connotations of the words we use shape how people see what we’re talking about, for better or for worse.

If I define a category for furniture, I’ll shape the way that people think about the category. They’ll picture in their mind what furniture means. They’ll see a chair, a couch, or a table. (At least 90% of the groups I do this exercise with say these three items.) If I’m looking for a rug, I won’t automatically look in furniture. Similarly, I’ll have a problem looking for a lamp. Is it in electrical or furniture? It has both properties.

So in one sense, a map isn’t a territory – but in another sense, it is, because it shapes that way that we think about the territory.

There is an information architecture problem caused when the categorization labels make it difficult for consumers to decide which path they should follow. One approach to solving this is to use polyhierarchy – having one category included in multiple places in the hierarchy – said differently, having two parent categories for the same category.

While this is a necessary strategy for providing solutions to platypus-type problems (which don’t fit neatly in any one category), it can be an unnecessary crutch used because of poor category selection. Like other tools in the information architecture toolbox, it’s important to know when to use it – and when not to.

The best strategy for managing the problem of things that fall within multiple categories of an existing taxonomy is to use multiple taxonomies. That is, instead of creating one and only one hierarchy of terms, multiple taxonomies are used, each with its own set of terms that can be selected when appropriate – and omitted when not necessary.

With all we know about how the mind works and how we categorize, we still don’t know enough, and we still can’t see enough. Breaking things down into their components so that we can learn about them is a good strategy. (See Efficiency in Learning and The Art of Explanation for more on learning approaches.) However, it’s not a good strategy if we fail to learn how those pieces fit together, how they work together, and how they break the rules when they’re connected to one another. That’s what makes things Intertwingled. They become that way because, when you put the pieces back together, you don’t always get exactly what you would expect. If you’re ready to start your own journey, perhaps it’s time to learn to see the world Intertwingled.