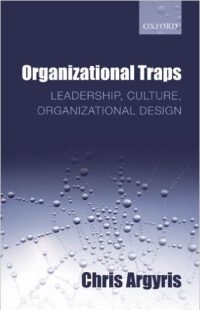 The first quote from the book in my notes is, “Anyone who has spent time in an organization knows that dysfunctional behavior abounds. Conflict is frequently avoided or pushed underground rather than dealt with openly.” This is the heart of why I knew I needed to read Chris Argyris’ book, Organizational Traps: Leadership, Culture, and Organizational Design. I knew of his work through other authors, including Peter Singe’s The Fifth Discipline, Jeff Conklin’s Dialogue Mapping, and William Isaacs Dialogue. I’ve used his ladder of inference in my presentations before. It was finally time to get around to reading how he saw organizational traps.

In Organizational Traps, Argyris walks us through the traps that organizations find themselves in and to a lesser extent what to do about it.

Chinese finger traps are fun to play with once you know how they work. Until then, it can be an infuriating situation to have your fingers caught in a device that gets tighter the harder that you pull. This is the nature at the root of organizational problems. It’s a trap that prevents you from moving forward – or backwards. It’s a set of circumstances that are hard to get out of by their nature. The system is set up such that problems occur.

Systems thinking is the idea that the structure of the system can drive outcomes in sometimes unpredictable ways. (See The Fifth Discipline and Thinking in Systems for more on systems thinking.) Organizations create double binds unintentionally: they’re the side effect of incompatible and conflicting instructions.

I mentioned that I took a stand-up comedy course some time ago in my post I Am a Comedian. What I didn’t mention was the double bind that we were put in as students. On the one hand, we were encouraged to learn a famous comedian’s material and be able to deliver it. On the other hand, we were nudged on the issues around plagiarism and told not to be too rigid on the stage. Necessarily to deliver someone else’s material requires that you maintain their posture and timing – which means you can’t be relaxed. I pointed this out to the instructors and they dropped the recommendation to learn someone else’s material and there by eliminated the double bind.

While working on my review for Dialogue, I wrote an entire post on defensive routines. These unconscious responses trigger us to defend our position. We experience diffuse physiological activation (DPA) and have our thinking compromised. (See The Science of Trust for more on DPA.) These defensive routines are in operation by default, because our brain functions mostly on what Kahnman calls “System 1”. That is, the automatic, pattern-matching, threat monitoring, low-power lizard parts of our brain, not the System 2 executive function that is the heart of our consciousness (see Thinking, Fast and Slow).

The Difference Between Saying and Doing

This gap between saying and doing – the fortitude to do what you say you’ll do – is a bedrock foundation upon which defenses against organizational traps sits. (See my post The Largest Gap in the World.)

There’s another reason why people don’t do what they say they’re going to do. In short, they don’t realize that they’re not doing it. They believe that they’ll do the right thing, whether it comes to finding a lost item, or making a decision to help an elderly lady cross the street – but too often they don’t. An old study was performed with seminary students and an accomplice. The study had the students head across campus to an important interview. Between them and their goal was a person, the accomplice,ho was seemingly in distress. This should have seemed like a perfect example of the Good Samaritan story from the Bible. Despite this, few students stopped to help the person who was seemingly struggling.

When we’re aware of our gap between statement and action, it’s one thing. It’s quite another to observe people who are behaving in a way inconsistent with their espoused beliefs. Sometimes it’s these gaps between what we say we believe and what we actually do that become undiscussable in an organization, because it’s uncomfortable to be shown how you’re not behaving in ways which are consistent with what you say you believe.

There’s a saying in recovery circles that “you’re only as sick as your secrets.” This is an admonishment at a personal level that it’s important to communicate with others and share your burden – not so much as a solution than as an invitation for others to share your space. At an organizational level, the same principles apply. The organization’s sicknesses are revealed in the undiscussable items in the organization.

Just as the healthiest people are those who are capable about speaking of their weaknesses, so too the healthiest organizations have few undiscussable or taboo items. Instead of running and hiding from the hard parts of the organization, they expose them to the light of day, so that their true size is exposed. The result is quite often that the taboo topic wasn’t as big and scary as it seemed.

Every organization has sacred cows. Those things that “must” be. However, when organizations define themselves by things that must remain the same, they often die as the world changes around them. The Pony Express might have been a great company, but defining themselves as the “Pony Express” rather than accepting their role as communications delivery, they died when the railroad could transport mail faster.

If National Cash Register (NCR) was still exclusively in the business of cash registers, they would not have survived. While not thriving today, they’ve had a pretty good run as an organization. They survived – and at points in their history thrived – because they were willing to slay their sacred cows and say that cash registers aren’t going to be their core business or their only business.

When an organization is ready to slay its sacred cows and the market is not, the market will help the organization stay true to its roots. When Netflix wanted to split into two brands, the market told them that this wasn’t the right move, and they went back to a company that used mail delivery for DVDs and one that delivered videos via streaming. Ironically, Netflix’s name reflects the true desire of the leadership, who were adapting with mail delivery until their vision could become a reality. They’re raising their sacred cow – that someday to survive they’ll have to slay.

The challenge with slaying sacred cows is that it invariably means conflict, and many of us are conflict adverse. We don’t like it, and so it’s hard to stay “in the fight” when you don’t like fights in the first place. In the workplace, the challenges around failing to have what Vital Smarts calls Crucial Conversations leads to a lack of transparency and trust that ultimately lead to the downward spiral of an organization.

Confronting conflict, while difficult to do, is the best way of disrupting the organizational traps and diffusing them. By refusing to “play the game” you’re uncovering and disarming the traps so that no one can step in them. Too few organizations value the need for appropriate, natural, and healthy conflict inside the organization.

The move to being able to have crucial conversations isn’t a one step process. Developing the capacity in the organization to have those hard conversations requires more than a fair degree of trust. When your family’s welfare is on the line, you’ve got to trust – really trust—that the organization won’t get rid of you just because you’re having the hard conversations. Most people who have been in business for a while have seen people who were the “trouble makers” get separated from the company. You can’t be a disruptor if your livelihood depends upon the organization and you simply can’t risk being let go.

Trust flows in both directions though. Leadership in the organization needs to trust that your motives for discussing an issue aren’t self-serving or designed to make the leadership look bad. They have to develop a trust that the reason for talking about things is to help the organization become better.

Eventually when enough trust develops it’s possible to start the journey towards dialogue.

If organizational traps are in the breakdown of communication, then dialogue is the daily vitamin that helps prevent the illness. Rather than repeat a discussion on this topic here, I’ll refer you to my three-part review of Dialogue: The Art of Thinking Together and my post Discussion and Dialogue for Learning. Dialogue is the antidote to many of the organizational traps that Argyris shares.

Self-Fueling and Self Sealing – The Power of Traps

The problem with Organizational Traps are that they’re self-fueling and self-sealing. They’re a system that has its own positive feedback loops, making them self-fueling. Once you stop talking about one sacred cow, it’s easy to ignore the herd that follows. The self-sealing nature of the pain associated with cleaning up the mess of having not dialogued about items makes it harder to start the conversation. In this way, organizational traps function because they load themselves and spread throughout the organization. That is, unless you have someone or a group of people who intentionally set out to disarm organizational traps to help the organization be its best.