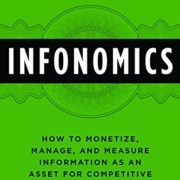 Most of the time, we pay no attention to the wind that’s blowing past us. Whether it’s a cool breeze or a warm draft of air rising from the pavement, we’re so used to air movement around us that we rarely consider its implications until we encounter a tornado or a hurricane. Until we’re faced with overwhelming evidence, it’s just background noise. Despite the little attention we pay to them, these drafts of air are clues to the creation of energy. Windmills can convert the cool breeze into electricity, and proper placement of solar panels can capture that solar energy instead of radiating it.

Infonomics: How to Monetize, Manage, and Measure Information as an Asset for Competitive Advantage seeks to help us do the same for our information assets. The goal is to help us understand how to take advantage of the information that’s all around us in an organization.

Before we can deal with the idea that information has value, we must first be clear about what we’re talking about. Doug Laney is credited with creating the three Vs for big data: velocity, volume, and variety. He’s got a deep history with data and big data. However, the line between data and information isn’t entirely clear. In the introduction, Thomas Davenport quotes Peter Drucker, defining information as “data endowed with relevance and purpose,” but admits that’s notoriously subjective criteria.

Laney never seems to put a stake in the ground to separate data from information. Though the implication is clear, he sees unstructured data as generating more value than the structured data that organizations possess – even in the world of IoT and big data. Structured data is the kind that you’ll find in databases. It’s organized into rows and columns or into a structured schema that can be read and understood with simple algorithms.

Unstructured data won’t flow into rows and columns, and the clarity of the relationships is much, much harder. Any sort of writing or presentation falls into this category. There’s useful information in the document, but extracting it requires more complex algorithms or humans who can decode the subtle relationships and achieve understanding.

Complicating things is that the library and information science community hasn’t been able to come up with a crisp understanding of the differences between data (which is the plural of datum) and information. Similarly, there’s little consistency on what constitutes knowledge. These ideas are built on Russell Ackoff’s work that includes an additional stop at understanding – which is an entirely internal human condition and therefore excluded from the traditional build up from data to wisdom.

The best picture that seems to emerge is that, as you transition from one layer of the data-information-knowledge-wisdom hierarchy, you add additional understanding and utility. Admittedly, this isn’t clear and doesn’t provide a mechanism for distinguishing one from another, but given that much of what we do is contextual, this isn’t entirely surprising.

The primary schism that has been identified by the industry is that some of the levels – data and information – are primarily external, and the upper two levels – knowledge-wisdom – are uniquely human endeavors (for the moment). Wisdom is further distinguished by its projective nature. That is, wisdom can reach into the future where the other forms do not.

The net-net is that it’s not surprising that Laney doesn’t delve into the muck of a definition as to what information is and why much of the praise for the book comes from people with titles that include data – but not information or knowledge.

Laney acknowledges that 90% of the cost of a project may be in the cleanup and formatting of data. I was trained on how to build data warehouses and did some work in this space over a decade ago. I decided not to focus my time in this traditional area of structured data management, called “business intelligence,” for only two reasons.

First, all data is bad. I don’t care where it came from or where it’s used. There’s bad data in every data source and it takes a very long time and a lot of effort to find it. While some can say that this only occurs in human-entered data and that IoT and other data sources are pure, I can tell you they’re not. The idea that you must debounce for multiple signals is as old as electronics. An easy way to see the modern challenge is to look at your fitness metrics from your watch or fitness device. You’ll find instances where you’ll have a single heart rate reading that is completely inconsistent with the rest of the data. While it’s technically possible that your heart rate would double for a minute and then resume a normal pattern, it’s highly unlikely. The more likely result is a bad reading. The process of cleaning these data points out – and doing so in a way that doesn’t skew the overall results – is a tricky proposition and fraught with problems.

Second, no business knows how it really operates. I’m sure there are diagrams or procedure manuals floating around in every organization, but they pale in comparison to the richness of the people doing the work. Because organizations don’t really understand how they work, the questions that are asked often lead to the wrong conclusions and bad strategies.

In the context of measuring the business value of information, it’s important to realize that the process of detecting and resolving the data errors in a way that allows the business to make meaningful positive decisions is a very heavy lift. While, on the one hand, I absolutely agree that information is an asset and that it has value, on the other hand, I’m concerned with our ability to extract meaningful information out of it.

You’re Soaking in It

There’s an old Palmolive commercial series where women are getting a manicure and the person helping them has them soaking in Palmolive dish detergent to moisten their skins – countering the perception that their dish soap is making their hands dry. The trick here is that we believe one thing and we experience another. We’re surrounded by data and information. The trick isn’t getting the data, it’s sorting which data is useful and which data is not useful. The problem isn’t, in most cases, a gathering problem; it’s a filtering problem.

Laney sidesteps the real issue of how one can determine what information they have from which they can extract value. He makes the point about the value of inventory on a balance sheet even though it can’t always readily be traded for cash. His point is that information should have a value, but I think the opposite point is interesting as well. You can only extract cash from inventory in the short term by offering a discount. That inventory is well tracked and maintained. It has a specific quantity and demand cycle. Information, on the other hand, has no such tracking, and, tragically, it’s hard to quantify both the value of and the cost for maintaining information. There’s no floor space that it consumes, and even the cost of storage inclusive of backup and other administrative support needs is still trivial.

In short, we don’t know what we have – but we’re soaking, if not drowning, in it.

Laney provides a set of valuation models for information that I won’t transcribe here. I will only say that there are ways that he perceives you can represent the value of information. I don’t actually think the key is in the exact formula used. The point isn’t the resulting number. The point of the process is to develop a credible value number that allows the organization’s leadership to really see and understand the value of information as an asset. However, this is often an emotional rather than rational process.

Book Review-Managing at the Speed of Change: How Resilient Managers Succeed...