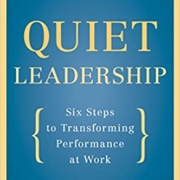 There are a lot of noisy leaders in our world today. There are too few people who have the courage and desire to demonstrate Quiet Leadership. The book is interesting, because, ostensibly, it’s introducing you to a six-step process for transforming performance. However, I found that it was hard to hold a line through the book and follow a straightforward path. Each step was clearly marked, but the path to the step and why it’s important was at times difficult to discern.

To be clear the idea that you’d be able to have someone read a book and through the reading suddenly be transformed in their performance into a more powerful leader is a good one. It’s the basic framework for any leadership book. The author says, “Follow my path to success.” The problem with this is that the author rarely followed the path they lay out themselves, and even if they did, they don’t describe the individual steps with sufficient clarity that they can be followed.

David Rock makes solid points in Quiet Leadership, but in the end the points feel more disjointed than a straight line down a path. So, this book is less likely to be a map and is more useful as a tip guide that shows you a few interesting points without necessarily transporting you to the destination.

If you’re a manager of the 1970s era, you were taught that employees needed to be managed. They would take advantage of the organization in any way possible, and your job as a manager was to prevent this from happening. The basic tension had existed for almost as long as organizations. Management and the Worker explains how it impacted the Hawthorne Works in the 1920s and 1930s.

More recent thinking and writing about management, including the works of Robert Greenleaf in Servant Leadership and Fredrick LaLoux in Reinventing Organizations, suggests a different view, one that focuses on how to unleash the power of employees. That’s the opening quote by Richard Florida from The Rise of the Creative Class: “People don’t need to be managed, they need to be unleashed.”

This is just one of many changes that would have the 1970s manager feeling as if they were on a foreign planet if they were to try to manage an organization today. It’s like The Planet of the Apes. The place is the same, but the rules are different. More importantly, the rate of change is so high that the 1970s manager wouldn’t be able to cope.

“Prediction is not just one of the things your brain does. It is the primary function of the neocortex, and the foundation of intelligence,” says Jeff Hawkins. Think about that for a moment. Of all the wonderful things that a brain can do, it’s prediction that’s at the core. Jonathan Haidt said something similar in The Righteous Mind. It was our ability to have a theory of mind – a prediction about what others were thinking – that allowed us to work together and to conquer the planet. Mindreading seems like a parlor trick until you realize that it’s a game of attempting to predict what others are thinking.

One of the key problems with our predictions is that they’re subject to numerous biases, as pointed out in Thinking, Fast and Slow. Simple things like the anchoring effect, described in Superforecasting and How to Measure Anything, cause us to fail to correct our predictions sufficiently in the face of new evidence – and this can be catastrophic. (See The Signal and the Noise for the statistical approach to revision in the form of Bayes Theorem – which is the basis of machine learning.)

Josh Waitzkin was a chess wiz and the subject of the movie Searching for Bobby Fischer, and he’s also an accomplished martial artist. However, he believes that his greatest skill is in learning. In The Art of Learning, he explains how he does it. The answer in short is, “My instinct is not to avoid the discomfort but to become at peace with it.” What discomfort? All discomfort.

For my son, I used to play Pokémon. I lost a lot. The national competition was in town, and I’d lose over and over again in random matches because I didn’t really understand the game. It sucks to lose so frequently, but at the same time, I could do it, because the real goal wasn’t winning the game. The real goal was to find a way to connect with my son. Over time, we’d do local and regional tournaments, and I got better – but never competitive in either sense of the word.

I had to get comfortable losing every match. I had to accept that I’d lose again and again if I wanted to be able to converse with my son. He and I got relatively matched in our skills and in the ways that we had our decks configured. It became a way that we could connect. (Read Comfortably Uncomfortable for more examples on being comfortable being uncomfortable.)

The truth is that we need struggle as humans. Even in the animal kingdom, there’s a need for discomfort. I mentioned in my post The Psychology of Recognizing and Rewarding Children and my review of The Book of Joy that helping sea turtles find the ocean dooms them, as they need the struggle to establish their orientation system. Baby chicks similarly need to escape their shells themselves or be doomed. In learning, it’s called desirable difficulty. (See How We Learn.) It can even be heroic.

When Joseph Campbell discovered the Hero’s Journey, he wasn’t expecting it. He didn’t expect that the formation of a hero in lore would follow a predictable 12-step pattern. (See The Hero with a Thousand Faces for more.) What’s most interesting about the journey is that we invariably discover the weaknesses of the hero, including the external and internal struggles. Even heroes, it seems, must struggle before they can become who they need to be.

Quiet Leadership says, “A big chunk of the world’s economy is built around reducing discomfort.” That’s a good thing if it’s directed towards our material needs and safety. We’ve learned to prepare and preserve food to reduce the burden of finding and cooking it. However, when the discomfort that we’re avoiding leads to ultimately unhelpful approaches that lead to addiction, we’re creating our own problems. (See Dreamland for more.)

There’s probably nothing more personal than trying to change someone else’s thinking. Our consciousness is how we define ourselves, and changing our thinking therefore changes us… and that’s dangerous territory. When we implement change in organizations, we’re changing people’s behaviors and hopefully their thinking. (See Change the Culture, Change the Game for more.)

If you want to change your thinking, maybe it’s time to read Quiet Leadership.

Organizations of all sizes are in a period of turmoil and transition, making effective change management more important than ever. With all the conflicting advice and change models out there, it can sometimes be hard[...]
Aug
10
Tue
8:00 am Extinguish Burnout: Practical Gu... @ IHCA/INCAL 2021
Extinguish Burnout: Practical Gu... @ IHCA/INCAL 2021
Aug 10 @ 8:00 am – 9:00 am

You’re constantly reminding, nudging, and nagging employees to do the things that you need them to do or stop doing things you need them to stop. You’re exhausted from the questions you’ve explained in your[...]
Sep
11
Sat
11:30 am Confident Change Management @ SHRM 2021 Annual Conference
Confident Change Management @ SHRM 2021 Annual Conference
Sep 11 @ 11:30 am – 12:30 pm

Everyone in healthcare is experiencing increased demands on their time, resources, and energy; this, combined with systems that are not designed to support the expanding daily work, has resulted in increased rates of burnout. Burnout[...]
Oct
17
Sun
all-day Burnout Prevention and Recovery @ ARMA InfoCon 2021
Burnout Prevention and Recovery @ ARMA InfoCon 2021
Oct 17 – Oct 20 all-day

The world is changing around us. New patterns are emerging and reforming at a pace never before seen. Bogue takes us on a journey through the forces that are changing our world, dives into the[...]