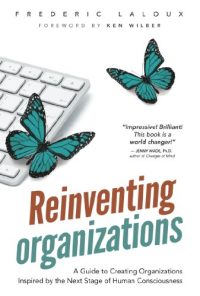 In Reinventing Organizations, cultures and organizations are stratified into colors and defining words based on their perceived maturity:

Theory U and Leading from the Emerging Future

One of the most pervasive thoughts when reading Reinventing Organizations is that there are parallels between Laloux’s work and Otto Scharmer’s views in Theory U – and particularly as the concepts are expressed in Leading from the Emerging Future. Specifically, Otto believes in four levels of organization, which are listed below with my mapping to Leloux’s colors:

The match in these models is relatively good. Otto seems to skip the amber/conformist stage but otherwise the stages line up very well.

Evolution doesn’t typically work in terms of a single generation; however, when I revisited my notes from America’s Generations, I saw a roughly similar pattern happening between Laloux’s organizations and the generations that Underwood describes:

While there’s some breakage at the end, in general the generations seem to fit into Laloux’s color identified models.

Some organizations claim to have conquered the organizational evolution mountain. Pixar, in Creativity, Inc., is described as a healthy organization where everyone has a voice in the creative process – but stops well short of what Laloux would call “teal” because of the lack of self-management. Similarly, the software development consulting company, Menlo Innovations, claims to have cracked the code in Joy, Inc.. However, while their ideas are absolutely green, there’s some question about whether they rise to the level of an organization where people are self-managing. While Laloux has his own set of teal organizations, it seems some of the existing organizational darlings won’t make the list.

What this demonstrates to me is that not every organization that is effective would be considered effective. In fact, Laloux makes the point that one level isn’t better or worse than another. There are evolutions that are more adapted to the conditions of society or the market. Within each level, there are healthy and unhealthy expressions. This reminded me of the healthy and unhealthy expressions in the enneagram as described in Personality Types: Using the Enneagram for Self-Discovery. For instance, giving everyone an equal voice – prized in green organizations – means that anyone in the organization can block the group if their whims and wishes are not incorporated.

If we, for a moment, accept that the environment you’re operating in could support a higher level of operation, how do we get there? There’s no three steps to the next level. Instead there are factors that lead to the conditions needed to make the leap. Chief among the factors is the operating level of the leaders in the organization. If they’re operating at a red or amber level, there’s little hope that you’ll be able to get the power of teal unleashed for you. That is, after all, the unstated expectation that more productivity comes from higher levels.

Twelve-step groups will tell you that the pain of staying the same must be greater than the pain of changing. Laloux says that the person must feel safe enough to explore their inner conflicts. Together, this indicates that we need to make people aware of the current pain and how there’s a better life available. Then we must create the space for people to want to make the leap themselves.

Some won’t make the leap, and the organization will need to decide about whether it can wait for the personal growth of one of the members, or whether that person needs to find another opportunity at another organization.

The cornerstone of Emotional Intelligence is self-awareness, which can be leveraged to reach self-control. This is much easier said than done. Building an ability to remain calm when confronted with aggravating situations is a life goal. Richard Moon (in Dialogue) points out that “centering” is an ongoing practice. It’s not, he says, that the great masters of aikido never lose their center. They only discover it sooner, and recover it faster, than novices.

Teal organizations require more emotional intelligence, self-actualization, and self-management to function properly. Simple rules like never using force (physical or emotional) against other people and honoring your commitments are very difficult. (See Mistakes Were Made (But Not by Me) for more on honoring commitments.)

At levels lower than teal (and perhaps green), work is somehow separate from who a person really is. To go to work, you must to put on your costume, including mental and emotional masks, and a uniform that’s approved by the organization. Teal organizations seek to accept that people are human and not cogs in a larger machine.

In my post How to Be Yourself, I explained the analogy of holding milk to your side and how exhausting the need to project a false image can be. Organizations that can be accepting of employees as they are – of employees’ whole selves – create the opportunity for the individuals to develop into the kind of employees that can function well in a teal environment.

I’ve long believed that coaching has the capacity to improve performance. Anders Ericsson explains in Peak how purposeful practice – especially in conjunction with a coach – can improve performance. Coachbook describes a set of tools that can be used to coach inside your organization. Laloux makes the point that, unlike other organizations who use coaching only for their executives and their high potential leaders, teal organizations make coaching a core practice. Instead of reserving the process only for a select few, they integrate it throughout the organization.

While I see this as a laudable goal, it’s an expensive proposition. The amount of time needed to perform individual coaching is why I created Discovered Truths as an alternative to needing individualized coaching for everyone. Certainly, if you can afford to do coaching for everyone it’s great, but most organizations struggle to push down coaching even to a management or supervisory level due to the cost.

Twenty Years and a Day

One of the profiled companies speaks of the need to look 20 years in the future and plan for the next day. This simple statement encapsulates a beautiful harmony between vision and planning. Vision is focused on the horizon and beyond. It’s about seeing where you want to be so long from now that there’s no way to know the exact path.

Effective planning is about organizing only the work which you can understand enough to prepare for effectively. That is only those things that you know well enough to anticipate the problems.

In looking 20 years into the future, we set our destination. By planning only for the next day, we focus on what we can plan for – instead of making plans that can never be executed because of the shifting sands of our world.