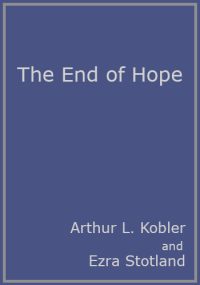 What differentiates the good programs from the bad?  How can you find the programs that will make a difference for addiction or suicide?  What if the answer comes down to hope?  The End of Hope is a retrospective of an affluent, private hospital that operated for years with no concerns for the suicide of its patients, but it faced a change when one patient made an attempt and it triggered four more – including a few successes – in the period of six months.

What could cause a facility with a great record and a belief they could cure anything to become the home of an epidemic?

The Power of Placebo

Was the success of the hospital due to the people that came together to start it or the brilliant work of the director of nursing?  Maybe.  It’s possible that they facility operated flawlessly but then lost their groove to the point of patients attempting suicide.  Or it could be that the active ingredient in what they were selling was always hope.

Hope was that people came to the facility, and then they got better.  Everyone got to see the marvelous results that the hospital had.  Even those who had been through other treatments unsuccessfully could go and be saved.

Hope is single-handedly the most powerful force in medicine.  It out-competes most drugs and confounds many studies.  If you tell folks you’re testing a new medicine and give them a sugar pill, they’ll suddenly get better – for no apparent reason.  The placebo effect is well known – and the most difficult thing to guard against when designing a study.

One of the key components is how the staff felt and how their feelings were subtly transmitted to the patients as a loss of hope.  Did the changes in staff at the hospital and the related lack of confidence erode the sense of hope, thereby making it feel as if patients were less likely to recover?  There are no obvious and definitive answers.  There are only questions about how a lack of clarity and confidence might have changed the general feel.

There was a change in the managing physician who had a different philosophy than had previously been used.  Pharmacology and electroshock therapy were options more than they had ever been, and the organization wasn’t exactly on board.

Prior to the epidemic, the staff felt like they could control suicide.  They believed that their skills and the institution itself could thwart any effort towards suicide, and it was within their power to help a suicidal person recover.  The confidence ran so high that it protected against the potential failures they might have.

A strange thing happens when people appear confident.  We generally trust them more, like them more, and follow their lead.  That isn’t to say that they’re right but that we’re more willing to follow where confident people go.  When that confidence wanes, we often experience the pop of the bubble of magic that follows them, and we snap out of our willingness to follow.

The Temptation to Regress

Much was made of a patient’s temptation to regress.  In Suicide: Inside and Out, there is a glimpse of how little time was spent on resolving issues while someone was in an inpatient setting.  There’s painfully little work being done on getting better and a lot of time just being housed.

The tendency to regress is a natural result of not having to worry about anything or work on anything.  In Being Mortal, Atul Gawande explains how something as simple as needing to care for a plant reduced mortality in nursing homes and senior living situations.  With nothing to care for, why would a patient even need to remain an adult?  They have no control and no responsibilities.

Perhaps one of the most striking things that surfaces is the fact that people were told directly and indirectly that they were a risk to themselves.  This couldn’t have helped but instead created a labeling effect where people began to accept and believe the labels that were being applied to them.

Over time, this labeling became a part of their core identity, and therefore no amount of work could separate them from suicidal thoughts, because it had become a core part of who they were.

The notes as communicated in The End of Hope didn’t seem to recognize this process in play or the mechanics.

Another subtle change may have made a big difference.  Rather than communicating to patients about the positive changes that the staff was seeing, they stopped commenting all together.  Ostensibly, this was so that they didn’t counteract the physician.  After all, the nurses and aids wouldn’t want to tell a patient they’re getting better if the physician didn’t agree.  The problem is that this had the impact of causing patients concern – and a loss of hope – that they weren’t getting better.

You’re Only as Sick as Your Secrets

In addiction recovery circles, there’s the statement, “You’re only as sick as your secrets.”  The intent is for addicts to start appropriately sharing with trusted people so they’re not shouldering their secret on their own.

There’s evidence in The End of Hope that people were holding on to secrets and those secrets were keeping them from being able to fully connect with the loved ones in their life.  Some of those secrets were how they felt but others were about things they had done.  In either case, the secrets seemed to nag at them in ways that were unhealthy.

There are cycles that are much more complex and asymmetric, but the basic pattern holds.  Recognizing the roles these cycles can play in reducing the psychic resources and perspectives of people is an important aspect of suicide prevention.

As a result of a loss, there can be great trauma.  Sometimes, in searching for answers and ways that things could have been prevented, the only answer is the magical one.  When a baby is lost through spontaneous abortion, the mother believes that she must have been responsible.  There must have been a way that she could have prevented it.

Sometimes there are things that can be found that might have possibly helped.  Maybe the mother forgot her prenatal vitamins one day.  However, no rational filter is applied to realize that there are many who don’t remember them every day, and even more who get little or no prenatal care.

The reality of the situation doesn’t seem to interfere with the thinking pattern.  It’s like if there’s a magical solution, then they can take some responsibility and therefore control.  If there’s no magic to it, then they’re helpless.

The biggest point to consider in the prevention of suicide – and in life – is not to ever allow The End of Hope.