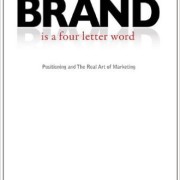 On one hand I don’t expect my audience to be trying to brand a company and in that sense I expect that some of my reading on marketing is uninteresting. On the other hand, I realize that many of my readers are trying to brand intranets or are working with clients that are branding intranets. Not having a solid understanding of marketing can be frustrating as the marketing department will try to convince you that something is essential – when there’s no research to support that position. This has led more than one of my colleagues to exclaim four letter words while working on branding and that’s why I believe Austin McGhie’s book Brand is a Four Letter Word is so appropriate.

I should say that most of the time when the word brand comes up in the SharePoint context it’s followed by “ing”. We tend to think of branding the portal. However, as McGhie points out, branding is the prize. It’s the goal that the market (or your market of employees) offers up to you once you’ve positioned yourself. Marketing, he claims, is the art of positioning. Brand is the badge that states that your market places a higher value in you than the utility you provide.

Those are strong words. Branding has been confusing to me since I couldn’t quantify what it was – and wasn’t. As I’ve been working on the branding for the SharePoint Shepherd’s products I’ve been playing with web site designs. I’ve been trying to define the visual interface of the web site but my greatest struggle has been clarifying my thoughts around what the brand should be about – or rather how the products should be positioned in the market. McGhie defines the real work as “defining, clarifying, targeting, capturing and holding your position.” In other words, the problem isn’t the web site (well it might be partially the web site) but it’s the clear understanding about what the positioning is.

McGhie spends quite a bit of time talking about ways to think about positioning including how to understand your market both through research and through the development of insights. Along the way he knocks down the idea that you have to be “out of the box” to be successful – including sharing the perspective that any idiot can be different – the trick is being different in a way that’s relevant to the audience.

Positioning is designed to make the unique benefits of your product or solution stand out so profoundly that no one can miss it. Consider those folks who are in the unfortunate position of job hunting. They approach their friends with a response like “I don’t know what kind of job I want.” As a result the friend has no way to help because they don’t know how to connect the job seeker with something that might be interesting to them.

The end goal of positioning is that the market reward you by calling your positioning a brand.

Branding is simply shorthand. It’s your message encapsulated into a neat package that the consumer understands. If you read Starbucks you think coffee. If you read McDonalds you’re going to think about inexpensive fast-food and golden arches. So doing the positioning for your brand is all about creating the result you want to see of the shorthand.

The ultimate shorthand is when you become the stand-in for the product category that you’re in. Facial tissue is called Kleenex based on the strength of the brand. That’s serious shorthand.

There was a time when marketing meant persuading your market to take an action. You had to convince your market that you were the right choice when standing in comparison to others. However, the problem is no longer a problem of persuasion – of comparison. We’re now so saturated and overwhelmed with information that the key isn’t persuasion it’s attention. We’re constantly under assault by advertising, by too many options, and an overwhelming ocean of information. If you want to build a brand in today’s world you have to get attention.

You have to break through the filters that every consumer has created to keep their mind from becoming hopelessly overwhelmed with all of the information that is available to them every moment. That isn’t to say that there’s no distance between someone becoming aware and them taking action. The book Fascinate told us that you had to first get attention, then remembered, and finally acted on. Similarly, the book Diffusion of Innovation talks about the difference between knowledge, attitudes, and practice. That is while our focus needs to be on attention rather than persuasion, we cannot forget that attention alone isn’t enough – it’s just the scarcest resource in today’s economy.

Over the years I’ve had the opportunity to watch markets evolve. I can remember early into the enterprise search game the players and their challenges. It generally wasn’t hard to sell someone who understood the value an expensive solution – but when the same companies who were commanding high-dollars for their solutions tried to broaden their market they quickly faced issues. They quickly got mired in the process of educating the market as to not what they do – but what the market is and why it’s important. Once a person understood what search was and what was possible, selling the actual product was easy.

McGhie makes the point that you don’t want to have a karate fight with your market. Karate is meeting force-with-force. Instead you should be fighting with Judo, which focuses on redirecting the existing force. You’re not going to win an all-out battle with your market by using your force to fight the force of the market. You’ll win by directing the market forces in the direction you want.

U is for Utility

We believe that today people are more me-focused than ever. They’ll step over a dead body to get a free trinket. Speaking as someone who has done a free book signing at a conference, I can tell you with certainty there’s a certain pull to the idea that it’s free. However, there’s also the other side of the coin. What does it do for me? Speaking for me personally, I’m encouraged to upgrade to the latest gadget. I’m certain I’ll be encouraged to purchase a Windows Phone 8 device. However, just as I did with the Windows Phone 7 devices, I’ll probably apply very little effort to getting one. Why?

Well, it’s primarily a question of differential value. What will the new phone do for me that the iPhone that I carry now doesn’t do? It’s got a cool new interface (which I’ll have to learn) and it might do some things better than the iPhone but at the end of the day what new utility will it provide? Speaking as someone who wrote a book on Windows Phone 6 devices (Mobilize Yourself!: The Microsoft Guide to Mobile Technology) I’ll tell you that the core features I need – making/receiving calls, sending/receiving text messages, and sending/receiving emails have all been solved for some time now.

Consumers are more focused on the utility than they have been in the past. What will it do for me? Am I willing to pay the price for that utility?

Disrupt or Be Disrupted

The book Demand quoted Jeff Bezos as saying “If anyone is going to destroy our online shopping business model, it’s going to be us.” Brand is a Four Letter Word encourages you to realize that if you’re not acting disruptively – it’s likely that disruption will be visited upon you by a competitor.

The market is going to change – because that is what markets do. You can choose to be in control or at least in the lead of these changes or you can choose to react to them once they’ve already happened. If you fear disruption, if you’re unwilling to try new things because you’re fearful about how they will impact your business, then all you need to do is wait because disruption will be visited upon you. Whether you’re in the package industry and FedEx comes along and makes shipment tracking easier, you’re in the book shop business and Amazon comes along with an online model, or you’re in the watch business and you’re realizing people use their cell phones for the time now.

Designing for a Core Customer and Taking Your Target Market

When motorcycles became associated with unsavory characters there were numerous companies that tried to distance the images of bikers from the gruff and tough image that had become coupled to the biking culture. However, one organization – Harley Davidson – embraced the image. They focused on the man who was trying to live out his rough loving persona. As a result, they’ve been very successful at selling their motorcycles but more importantly they’ve created a following and culture. They’ve identified that their core customer is a rough and tough person – realizing that by having this as the core customer they’ll take a much larger target market.

McGhie uses the example of Nike and their focus on their core customer – knowing that they’ll be successful by taking the larger target market that wants to identify themselves with the core customer.

If you’re frustrated by the marketing and branding process, you may want to read Brand is a Four Letter Word for yourself.

Article: Size and Scale of SharePoint 2013 in the Desert