Book Review-A Hunger for Healing: The Twelve Steps as a Classic Model for Christian Spiritual Growth 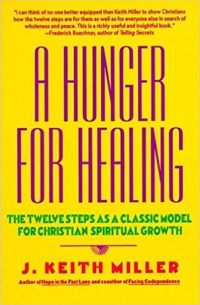 Book Review-A Hunger for Healing: The Twelve Steps as a Classic Model for Christian Spiritual Growth

A good friend and Christian life coach and I were talking and he mentioned the book A Hunger for Healing was packed with insights and that I should read it. Most of the time when people make a recommendation for a book to read it takes me a while to get to it – this was no exception. I recognize that the research that I’ve done into the roots of Christianity and the intersection of Twelve Step programs is probably more than most folks would be interested in. (See Spiritual Evolution, The Great Evangelical Recession, Churchless, for more on Christianity and it’s evolution.) However, there were some insights in A Hunger for Healing that needed shared – and more importantly it’s the link to a book called The Road Less Traveled that was amazing.

It’s been said that the church is the only “army” that shoots it’s wounded. There are plenty of places where you can see where the church has done as much harm as it has done good in the world. Recently the pope relaxed the views of the church creating more acceptance of both divorced persons and homosexuals. The church historically had shunned those who were divorced and who were homosexual. While there’s a growing acceptance both groups of people remain treated as if they are damaged goods at some level.

There’s a common fallacy about becoming a Christian that once you accept Jesus Christ your problems stop. All you have to do is accept Christ and the work is over. The truth is that this is when the work really begins. I don’t personally put much stock in spiritual warfare but I know that my problems haven’t stopped.

You’re Soaking in It

The more I research cognition and the psychology and neurology of it the more convinced I become that most of what we are is unconscious, not conscious. From the Rider-Elephant-Path model in The Happiness Hypothesis and Switch to the neurology of Incognito to Sources of Power and Recognition Primed Decisions (RPD) there are hints that how we make decisions isn’t either rational or under our control.

Certainly as Kurt Lewin said, “Behavior is a function of person and environment.” We have free will but ultimately our behavior will be determined by both who we are as a person and the environmental factors that are surrounding us. However, there’s more than just the first order problem to look at. The second order problem is that we adapt to social norms. That is if others around us are doing something it’s likely we’ll feel like it is OK. This leads to the broken windows theory of crime covered in The Tipping Point.

I’ve heard criticism of twelve step programs that amounts to “I’m not an addict, so how can it help me?” A good friend of mine pointed me to a story in the Alcoholics Anonymous “big book” to read. I read it and told her that it didn’t make sense. She responded that she asked me to read it precisely because it wouldn’t make sense. She told me that the story resonates with addicts – the story of continuing to do something that you know is harmful is something that they can identify with. For me it didn’t make sense and in this was a very discernable difference between an addict and my situation.

However, despite this, I can say that programs that are based on the twelve step principles can be valuable to non-addicts. The great wisdom that is in the program and more importantly the people applies to every human. Things like “You’re only as sick as your secrets” reminds me to move into my relationships even when I don’t want to.

What I realize as I attend meetings is that I’m “soaking it in.” There are things that I hear that don’t connect for days, weeks, or months. I’m going not because I need a specific insight but rather that I recognize that there is wisdom here.

A typical response of an addict – and most of the rest of us – is “white knuckling it.” That is using willpower to overcome the desires of our heart. Whether it’s a drink, or shopping, or sex, the “in control” person prevents those behaviors from leaking out by sheer force of will – that is until they run out of will power. However, sooner or later everyone does run out of willpower. Rather than trying to fix the pains that are bubbling up they try to fight the urges and overcome them. (See Chasing the Scream for more on pains bubbling up.)

Controlling others is the subject of Compelled to Control – one of J. Keith Miller’s other books that I’ve reviewed. At the heart of the matter is our belief that we have to be in control of our lives and that we’re responsible for our well-being.

God in the Center

A healthier arrangement is to put God in the center – make him responsible for making all things right. Twelve Step programs are careful to say that anything can be your “higher power.” However, I believe that this is largely because folks have such a distorted view of God that saying God from the outset would probably cause many to run away from the programs.

Whether you believe in an all-knowing and loving God or not – even if you’re an atheist – it’s helpful to realize that you don’t have to be in control of everything. You don’t have to have the solution to every problem. A friend, someone who loves you, or the universe will send you the answers you need.

It may seem odd that when confronted with someone who seems self-indulgent, whose behavior is harming themselves and those around them, one of your responses should be to teach them self-care. Instead of a life draining addiction or struggle they’ll often need to learn that it’s OK to take care of themselves. It’s an odd paradox that you have to be “selfish” to be able to support others but that is a fundamental truth.

The way that healing comes, the way that we become more whole than we are today is by being intimate with another person. By finding the person who can see us for all that we are and seek to help us become better each day. We heal because others care enough to see our broken spaces and cover them with their love and acceptance. (See How to be an Adult in Relationships for more on acceptance.)

Some are tragically incapable of intimacy and therefore will struggle to heal. (See Intimacy Anorexia for intimacy problems.) It’s through our powerlessness – and the help of others – that we become powerful. Like exercise where we tear down muscles and they come back stronger so we come back stronger when we are able to heal ourselves. So don’t lose. Keep your (A) Hunger for Healing.

PrevPreviousArticle: Freedom Through Apps: Targeting and Marketing Your Apps
NextMy Video Studio 2.1Next