Blog
You are here: Home1 / Blog2 / Book Review3 / Book Review-The Fred Factor: How Passion in Your Work and Life Can Turn... 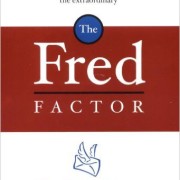 It’s pretty common for professional speakers to have some sort of a book to promote themselves and their talks. That’s not at all different. However, the difference here, for me is that Mark Sanborn’s name just keeps coming up. I can’t explain that other than to say that in different circles and at different times I hear Mark’s name – and I have heard about The Fred Factor. Fred is a postman – or rather he was a postman. His customer service and care for his customers – particularly Mark Sanborn – made him the inspiration for Mark’s book about making the ordinary extraordinary.

Many workers in retail wear badges with their names on them. How many people do you know address the other person by their name? If you say “Thank You” – and not everyone does – do you say it with the person’s name you see or just the generic and half-mumbled thank you?

My wife, Terri, is great at this. We’ll be walking along and she’ll say “Hi Bob” or “Thanks Jane” – and even to this day, I’ll occasionally turn and ask her “Did you know that person?” The answer is frequently – but not always – no. However, she’ll find a way to see their name on their nametag when I didn’t even notice it was there.

This is a sort of personal connection. It’s customer service in reverse. It’s being a human who is so concerned with others that you want to greet them by name when you can.

My good friend Scott loves to say about me that I always do everything with excellence. (He’s wrong by the way, I don’t do everything with excellence, I just do what I can manage with excellence.) He’s explained to me several times what he means and at some level I still don’t get it. You see for me, doing things as good as possible all the time, is the way I do things. However, I’ve come to realize that this isn’t the norm for most people. People naturally only put themselves out there to do their best occasionally. There’s safety in being able to say that you didn’t do your best. If someone doesn’t like what you’ve done, they don’t know what you’re really capable of. (See Trust => Vulnerability => Intimacy and Find Your Courage for more about being fully out there.)

My friend Joel describes excellence as doing the best you can with what you have all the time. This description is to try to differentiate it from perfection. He knows that we all make mistakes but simultaneously that we can set ourselves up for success by preparation and hard work.

Most people seem content with putting in only the effort necessary to meet the standard. The standard is the measuring stick. However, with excellence the measuring stick isn’t what the standard is but is instead what you’re capable of. With the concept of Flow (See Flow, Finding Flow, and The Rise of Superman) we know that this optimal state is achieved when the gap between the skills and the challenge is 4%. People who do things with excellence are always asking how they can get to the optimal state of flow instead of resting on their laurels and accepting the standard.

What does excellence look like? It looks like something that is outstanding – something that is set apart from the norm. Sometimes just deciding to do everything can change the ordinary into the extraordinary.

I was recently at Graceland and I was struck by a fact that Elvis only ever personally received one award in his life. That was an award from the Jaycees. It wasn’t about music. It was an award for being one of ten outstanding young men. Of all of the awards he received the one that wasn’t about his music but was about who he was – that was the award he honored by accepting personally. In the supporting audio at Graceland it was explained that he didn’t feel worthy of the honor. He felt like he was “just” entertaining people. If Elvis – the king of Rock and Roll – believed that he was “just” entertaining what is it that you’re “just” doing?

Most of the resources you have are between your ears. They exist in the world of possibilities in your mind. The times when I’ve been told I’m the most creative, the most innovative, and operating at the highest levels of excellence are those times when I’m solving problems. Whether it’s the custom made lighting for the video studio which utilizes strip LED lighting so I can get over eight linear feet of even lighting, or the lighting truss that is standing on end to be my camera tower for the studio – or any of the other dozens of things that exist in the world here but almost nowhere else, creative problem solving is excellence in action. (You can learn more about my video studio in my post My Video Studio 2.1.)

Sometimes what people are missing is creative confidence (See my review of Creative Confidence.) Sometime the missing components are the mental models at the heart of recognition primed decisions (RPD) (See Sources of Power and The Art of Explanation for more on mental models.) Problem solving comes from an awareness of how things work. This essential understanding of the components allows you to change the way things work – or create new working systems. (See The Fifth Discipline and Thinking in Systems for more on systems thinking.) Sometimes the way things work are the mental processes that operate inside someone’s head.

By combining a willingness to try (Creative Confidence), an understanding of how things work (mental model), and an awareness of systems (thinking in systems) truly interesting and innovative solutions can be created for problems. Those solutions don’t have to require money. When confronted with a problem we tend to try to find a solution to match the size of the problem. However, when you understand systems you can put a small change in place that makes a big impact.

In flying, we have trim. That is, there is a function to help keep the controls in the place where we want them. It allows pilots to reduce their work and focus on other things. Elevator trim sets the relative position of the elevator and thus that attitude of the plane which ultimately controls the altitude of the airplane. (Attitude is how far up the nose is pointing.) The trim is controlled by the pilot by a wheel. The actual implementation is a small door that is actuated up or down to control the overall position on the larger surface – in this case the elevator. A little bit of the surface makes a big impact on the overall surface – and on to the pilot’s workload.

When you’re solving problems with customer service or in life, you don’t have to find big solutions to big problems. Sometimes the best solutions are the simplest. Sometimes they’re treating others like honored guests.

Excellence Without [Much] Money

Last year, I was speaking in Boston and my son and his girlfriend got to come up and visit. My wife and I love lighthouses. We took a tour around the lower peninsula of Michigan to see every lighthouse. We wanted to see the lighthouses in Boston. One of the tours would allow us to see a few of the lighthouses. It was something like $50 per person. So around $200 for the four of us. Rather than taking this path we were able to find a company that would rent us a boat for two hours for about $200. We got a chance to go out on the water and enjoy ourselves without having to fight other people – and we got to go see all of the lighthouses rather than just seeing one or two. It’s true that we spent $200 on the experience – but the cost difference between getting an excellent experience with the four of us and the cost of “doing the tourist thing” was roughly equivalent.

Excellence isn’t about how much money you can spend to solve a problem or to create an experience. Many of the times when folks have spoken loudly about excellence, it has been about small things. Tom Peters and Robert Waterman wrote in In Search of Excellence about the thousandths of a percent improvement that come from the trivial and mundane.

With this as a backdrop, The Fred Factor presents us with four principles:

Here, excellence isn’t measured in having the most optimized system for delivery of widgets. It’s not about one master architect at the top of the pyramid who makes all the right decisions. (In fact, Innovation is about pushing innovation down to everyone. See Unleashing Innovation and The Innovator’s DNA.)

I had done something small in my opinion for someone. It was so small from my point of view that I don’t even remember what it was. I was commenting upon how it wasn’t a big deal and my friend stopped me short and reminded me that the value of the gesture wasn’t in the effort it took me to do it. The value was on the receiving end because the person couldn’t do it for themselves. What I could do in a few minutes they wouldn’t be able to do at all.

It’s these simple things that can make the difference. The value isn’t in the cost to do something – it’s in how the recipient of your gesture values it. If you’re able to care enough to pay attention to when people are home or not, you can help keep watch over their home – from your mail truck.

Finally, whatever you are today doesn’t mean that it is what you must be tomorrow. You have the capability to improve and grow. (See Mindset for more on changing your mindset.)

Whatever you’re doing, go out and do it the best you can and maybe you can become The Fred Factor.