Blog
You are here: Home1 / Blog2 / Personal3 / I’ll Have Some Emotional Stuffing with That 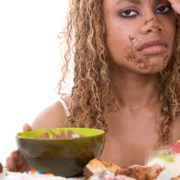 Occasionally, I’m afflicted by the curse of knowledge and I’ll use a term without really defining it well. One of those words is – apparently – “stuffing”. That isn’t the kind of thing that goes in a pillow or even the kind of side at a turkey dinner. Stuffing is short for “emotional stuffing”, or denying our emotions. This is an attempt to explain what it is and why it’s bad. However, before I get there, it might be good to start with a helpful, related technique called “compartmentalization”.

Some call it focus. It’s the ability to block everything else out of your mind – for a time. It’s a natural reaction once you can get into the state of flow. (See The Rise of Superman for more on the changes the brain goes through in the state of flow and Flow and Finding Flow for more on the state.) Men are – appropriately – called out for their obliviousness. They’ll walk over the dead body in the living room as they make their way to the kitchen if they’re involved in something. Some women would say that they’ll overlook the filth of the house just because they don’t want to help clean it up. While this may be true of some men, the ability to focus and compartmentalize is a real function of the way men’s brains evolved.

Compartmentalization is simply the ability to keep things out of our mind for a while. I can remember finishing up an engagement in New York the day I found out my grandmother had died. This particular client wasn’t one I knew well. I was in to do some “surgical work”, where I’d know them for a few days then likely not talk to them again. It was just the afternoon of the last day and I was leaving at 4PM for the airport. Through a great deal of work, I was able to compartmentalize the death until I could process it later that evening when I returned home.

We see this in the movies when one character calls out to another that there will be time to mourn the dead later. When they say this, in effect, they are saying that there is a reality that they can’t fully process at that time. This is a useful and evolutionary necessity. Losing your friend Bob to a lion attack is impactful but at that moment survival depended upon being able to fight off the lion or run away. (This reminds me of a bad joke about how I don’t have to run faster than the bear. I just have to run faster than the person I’m with.)

The ability to focus allowed us to gather up all our resources to focus on one thing. We could use every ounce of our willpower to hunt and kill an animal so we had food. Conversely, women were conditioned to be ever-vigilant to threats to the family and themselves, and as a result got wiring towards not compartmentalizing things into neat little buckets.

Jeff and Shaunti Feldhahn speak of another analogy in their book For Men Only. It speaks of a women’s thought process like sitting in front of a computer with multiple windows, each vying for attention. They’re always popping up and interrupting about going to the dry cleaners, or planning the meal for tomorrow, or one of a hundred other things that are randomly competing for attention. Men, on the other hand, can be like the old DOS operating system where there is only one thing running – or like a modal dialog that captures the attention of the entire screen.

I tend to think of compartmentalization like pressing pause on an old VHS video cassette recorder (VCR). There would be lines of interference and then ultimately the VCR would shut down to protect from wearing through the tape. In the VCR, there’s a physical process where the head is literally rubbing against the tape when paused, and if it were left on too long the head would quite literally wear through the tape. In other words, compartmentalization is good when you need it, but isn’t something that is designed to be sustained forever.

The problem with stuffing is that it relies upon the same evolutionarily useful tool of compartmentalization, but it presses (or stands on) the pause button. It’s taking compartmentalization and allowing it to happen for too long. It’s refusing to acknowledge the feeling exists, or it’s saying that the emotion isn’t important, or that I don’t have time to deal with it right now.

In the Rider-Elephant-Path model (See The Happiness Hypothesis), the rational rider only has control while he’s active – when attention wanes, the elephant does what he wants. That’s the easy part. However, what’s harder is the understanding that the rider is never in control. The rider has the illusion of control as long as the elephant allows it. When you deny the elephant what it needs – processing of the emotion – eventually it will stop listening to the rider. Eventually the relationship between the rider and the elephant will become so strained that there’s an all-out battle happening. We have the classic case of Dr. Jekyll and Mr. Hyde. The schism that splits the person is going to come out somewhere.

All too often medical doctors are the ones that find it. There are strange and elusive auto-immune diseases that no one can pinpoint, or chronic pain without a defined cause. Sometimes it’s standard illnesses like the common cold at a rate that’s abnormally high. We believe that our brain and bodies aren’t linked, but the reality is that our bodies need the control functions of the brain. When the brain isn’t functioning right because it’s been asked to do something unnatural, like stuffing emotions, bad things happen to the body.

One of the key reasons why people stuff their emotions is because they never feel safe enough to be vulnerable. (See my post Trust=>Vulnerability=>Intimacy.) They never perceive that anyone would accept them, including their weaknesses and frailties. (See How to Be an Adult in Relationships for more on acceptance.) Whether this is true or the result of adverse childhood events (ACE) doesn’t matter; the reality is that the perceived safety is missing. (See How Children Succeed for more on ACE.)

On Death and Dying described an emotional framework for the changes that people go through as they learn that they are dying. What is remarkable about the work is the acknowledgement that people need the space to process through things on their own terms. There’s no specific timing for going through each phase. There’s no one way of grieving. There’s only the acceptance that the struggle exists and being willing to walk through it with folks.

Passing on the Stuffing

There are so many random, unexplainable things that happen when you’re not able to be true to yourself and process your feelings in a healthy way, that it’s hard to imagine that anyone would want to do emotional stuffing. That is, unless the idea of stuffing your emotions was passed down to you. Many of us have members of our family for whom emotions aren’t safe things. Because they’re not safe, they’ve passed along the idea of stuffing to us.

It’s time to take a pass on stuffing and find a way to process all of the emotions that life has to offer.

Book Review-The Wisdom of Walt: Leadership Lessons from the Happiest Place on...
Scroll to top
%d bloggers like this: