Blog
You are here: Home1 / Blog2 / Professional3 / Adoption and Change4 / Book Review-Grit: How to Keep Going When You Want to Give Up 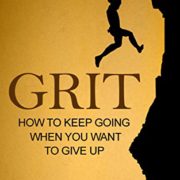 You can’t make it very long in business without a bit of grit. The statistics are daunting. Within 5 years, 80% of the businesses that were started won’t be around any longer. You can’t raise a family without a bit of grit. There are many times when you’ll wonder as a parent, “Am I doing this right?” In area after area of our lives, it’s easy to see where grit is required to accomplish our goals and live life to the fullest. That’s why Martin Meadows’ book Grit: How to Keep Going When You Want to Give Up is such an important read.

The Trough of Disillusionment

Gartner created the idea of a “hype cycle” to graphically represent the emotions behind the release of new technologies, tools, and techniques. After the initial trigger, there is the peak of inflated expectations, followed by the trough of disillusionment. This is followed by the slope of enlightenment, and ultimately ends with the plateau of productivity. Gartner doesn’t run the line to the right far enough, though: there’s also some level of “sunsetting” that happens for every technology where it falls out of favor. 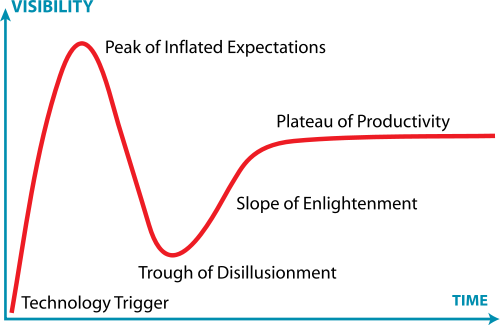 The beauty of the model is that it explains quite well how new technologies are adopted. Like Everett Roger’s Diffusion of Innovations, it contains a model for the classic pattern that innovations diffuse with. However, the hype cycle is about the emotions felt through the diffusion process. While its name is associated with the “hype”, or hyperbole, the labels for the sections make it clear that, at its heart, we’re talking about the emotional component of the adoption.

Everything we do in life seems to follow a similar cycle. We fall in love and have our inflated expectations that we’ll never fight. We start a new job, and there’s nothing wrong with this organization. Over time, we begin to see things more accurately – or perhaps too pessimistically – and believe that perhaps our new love isn’t the right one for us, or this organization is sicker than the last one. (The Paradox of Choice
discusses some of the factors that can lead us to buyer’s remorse about our choices.)

Our real defeat in whatever we’re doing comes from the trough of disillusionment, when we allow our mind to decide for us that what we’re doing isn’t worth it, isn’t going to work, or isn’t what we want. Grit is the mental toughness that can prevent our minds from believing that we’re not good enough to be successful or that the goal isn’t worth the work. We don’t get exhausted as much as we think and feel that we are exhausted, and we become it.

There are three general views on mental toughness. There’s the naïve view that you just power through it. You lace up your Nikes and “Just Do It.” There’s the view that it’s some meditative state of nirvana that can only be reached by a backpacking expedition to Tibet. Then there’s the view of those who have been in the trials that required mental toughness. (One example is the book, which is like a journal of a man who has walked a hard road, called The Road Less Traveled.)

Each month, I sit with a group of CEOs to talk through where we are, and to get advice on how to move our businesses forward. And each month, I’m amazed at the challenges that life throws at us. Collectively, the challenges are crazy. One guy had an opportunity with a large oil company disappear because the agent managing the introduction literally died. Industries he was pursuing have collapsed out from underneath him. Another member of the group watches his fortune rise and fall based on the oscillations of the retailer’s whims. Each month, I watch these guys get pounded on by fate, and wonder whether they’ll “make it”, or whether their current project is just another failure on their road to success. (See Rising Strong Part 1 and Part 2 for more on the role of failure and getting back up.)

I’ve been in business this time around for over 11 years. There have been several times when I have considered giving up and moving on. I’ve considered the idea that I’d take a job somewhere and “hide out” long enough to regain my strength and will to fight again. I never pulled the trigger because everything didn’t line up quite right, but it’s something that I’ve considered.

It’s hard not to consider whether what you’re doing is right. If you’re trying to reach your peak, you’ve always got to be mentally rehearsing and evaluating what you’ve done. (See Peak for more about peak performance and what you do to achieve it.) Self-evaluation is a requirement when you’re trying to be the best you can be, and this self-evaluation drives you to the question about whether “it” will work, whatever “it” is.

Whether you’re a Navy Seal candidate who is trying to get past the limits of your body’s toughness through the pain and fatigue or you’re a business man who has struggled for years, the key to success doesn’t rely on your physical capacity or your business idea: the key to success rests on your ability to keep your head in the game.

Grit is — in part — the same as willpower. (See my review on Willpower if you want to compare perspectives.) The Psychology of Hope
considers it an essential ingredient for hope (and therefore happiness). While there are many that say it’s essential, the definitions sway between authors. Some believe that willpower is about self-control. Others believe that willpower is about “get up and go.” Obviously there are other perspectives as well. Willpower might be a shortcut way for describing a category of mental processes that are used to overcome barriers put in our way. (See Demand for how little a barrier needs to be to stop us.)

The problem with willpower is that isn’t a single thing. There are differing abilities to cope with different kinds of adversities in different areas of our lives. Willpower may be the resolve to push through our struggles – but everyone experiences their struggles differently. It’s hard to “know when to hold ’em, know when to fold ’em”, as the old Kenny Rogers song “The Gambler” points out.

Jim Collins in Good to Great discusses the Stockdale Paradox, which he explains as, “You must maintain unwavering faith that you can and will prevail in the end, regardless of the difficulties, AND at the same time have the discipline to confront the most brutal facts of your current reality, whatever they might be.” Grit taken to its extreme is that unwavering faith. I’ve always had a problem with discerning between when you should continue to persevere and when it’s time to find another passion to pursue.

I call this spot where there’s a paradox that has no answer the “and then the magic happens” point of the story. That is, there’s no way to predict what will happen. You don’t create a special set of magical conditions that move you from one reality to another. Only by random chance, dumb luck, and perseverance are you successful. In fact, as I have come to accept more-and-more that life is a series of probabilities and not certainties, I realize that sometimes just the act of continually trying is enough to be successful. (See The Black Swan for more about probabilities and our failure to predict.)

For the battle that rages in my head as I attempt to discern when it’s time to try something new and when it’s time to “double down” and make another push to make my latest dream a reality, there are arguments like, “Better to live to fight another day”, and “nothing hard ever came easy to anyone.” Good grit isn’t always deciding to push through things. Good grit is deciding when to move to the next challenge.

Maybe it’s time for you to get your own Grit.

The Deep Water of Affinity Groups
Scroll to top