Blog
You are here: Home1 / Blog2 / Professional3 / Relationships4 / Book Review-Safe People: How to Find Relationships That Are Good for You... 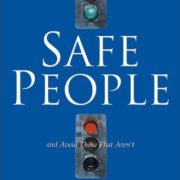 Growing up, my family was dysfunctional. I realize that this is redundant. No family system is completely healthy. There are always portions of the family that will be irresponsible. There are parts of everyone’s family that will try to control others. There will be the placaters, who can’t confront issues even if they’re glaring. From this environment, I grew up, and I learned, imperfectly, how to find safe people – people who I could share my burdens with. Finding the right kinds of people – and becoming the right kind of person – to be safe is what Safe People: How to Find Relationships That Are Good for You and Avoid Those That Aren’t is all about.

Beyond our family, most of us have experienced relationships that aren’t healthy. We’ve stumbled into unsafe people and have let them into our inner worlds, only to discover that they’re not the kind of people that you should be close to. (See Choice Theory for more on our inner worlds.)

Cloud and Townsend believe there are three types of unsafe people:

People who fall into these types aren’t safe to be with. They’ll not be there when you need a friend, or they’ll confront you with truth when what you really need is love and grace.

Perhaps the greatest “trick” to this life is finding people who are safe, and therefore can help you grow, instead of people who are unsafe and will only serve to harm you and your growth. This requires discernment.

Discernment is the winnowing process. It’s sorting folks into safe and unsafe, and we believe that we should be better at it. Some of us should be. Some of us make the same mistakes with the same kind of person over and over again. However, for many folks, we connect with someone without realizing the character deficiencies that might make them unsafe.

We must start with understanding discernment and realizing that we’re trying to practice a kind of mindreading trick that can’t be accurate all the time. (See Mindreading for more on this cool evolutionary trick.) Most people who have had to hire others for a job realize that an hour in an interview isn’t enough to know whether someone will be good at a job or not. (See Who: The “A” Method for Hiring for more on the hiring process.)

We can’t use the same tactics and tools for interviewing people to be in a relationship with. We must try things over time to get to know people and whether they’ll be safe. We must accept that we’re going to be wrong sometimes. We’re going to stumble into unsafe people. The real discernment is whether we can avoid the same mistakes next time.

In some ways, the fundamental question about finding safe people or not is a bit of a misdirection. We’re all unsafe people – at times. We’re all less than perfect when it comes to coping with this world and being in mutually beneficial relationships with other people. We can gauge how safe – or unsafe – a person is only by observing their behavior over a long period of time.

We need to see them under stress and see how they express their needs. We need to see how they choose to behave when “the chips are down” to know how safe they really are. What we desire most in our relationships with other people is consistency. We want to know that they’ll be there for us when we need them.

Unfortunately, consistency necessarily means “over time” and because of that we’ll have a substantial investment in a relationship before we can know for sure.

Must Be Seen As

Real relationships require that people be real. Real people are people with faults, foibles, and weaknesses. People who are in positions that require they “be seen as” perfect are in the wrong position. Anyone with “must be seen as” is necessarily denying a part of themselves and is subject to the potential harm that comes from not being yourself. (See The Anatomy of Peace for more on “must be seen as”.)

Relationships have a degree of safety and a degree of vulnerability. (See Trust => Vulnerability =>Intimacy for more about why this is required.) Those people who can’t be vulnerable aren’t able to be in a complete relationship with others – the kind of relationship that improves health. Wherever we can’t let others in to see the real us, we deny our true relationships with others, and as a result, we remain separate and disconnected.

Being Comfortable in Your Own Skin

Sometimes it’s easier than others to identify safe and not-safe people. Safe people are comfortable in their own skin. (For more on this, see What Got You Here Won’t Get You There.) They know who they are and who they are in relationship with other people.

There is a great deal of power and invulnerability by knowing who you are. When you hear things that you know are not true about yourself, you can reject them – or find the kernel of truth in what is you and remove what is not from the feedback. You can expose yourself to more vulnerability without worry of being overcome by it.

Being comfortable in your own skin – for most people – takes a great deal of work. It takes studying, reflecting, meditating, and patience. There’s no one formula for becoming comfortable with who you are – but it’s something that other people will see when you get there.

One of the challenges with being comfortable in your own skin is that sometimes you can come off as arrogant. Someone once explained to me that the line between confidence and arrogance is razor-thin, and it’s drawn in the eye of the beholder. In other words, those who are comfortable in their own skin are often identified as being arrogant because of their self-confidence. John Dickson in Humilitas said, “One of the failings of contemporary Western culture is to confuse conviction with arrogance.” We’re so used to the fragile, broken images that people project to others, that when someone has the capacity to send an image that is their real self, warts and all, we’re confused and taken aback by it.

It’s surprising, therefore, to realize that another one of the markers of a safe person is a level of humility. The best definition of humility that I’ve heard also comes from Humilitas, and it’s “power held in service to others.” That is, humble people are servants. (See Servant Leadership as an example.) Most people who have become safe (or safer) are people who have found themselves and who’ve found their need to be in relationship with others.

Servant leaders – or the humble people who serve – don’t do so to make themselves feel better about their lives or what they’re doing. They serve, because it’s the image of themselves they want to imprint upon the world.

Conflict is Not Bad

Despite popular opinion, conflict is not bad. Only poorly handled or poorly initiated conflict is bad. It’s bad, because it causes damage to the relationship. In our culture, we’ve developed a belief that if there is conflict, it’s a bad thing. However, in my experience, a lack of conflict is a much more concerning statement. It generally means that people aren’t being real. Sometimes it’s truth, but often it means someone is sugar-coating things.

For the first few years of our relationship, my wife and I would say that we didn’t have any conflict. Our friends, who are particularly well-trained in psychology and relationships, were concerned with this statement – appropriately so.

However, what we began to realize is that we had disagreements, but we were both so focused on our relationship that rarely did our disagreements elevate to the position of conflict. For those few that did, we addressed them so quickly that we didn’t even remember we were having them. Imagine having a friend remind you of a conflict that you wouldn’t have remembered without the reminder. This was the world we were living in. Conflict was being managed so well we didn’t remember it.

That’s the willingness to be wrong, to accept and learn from the perspectives of others. Safe people know that conflict should be avoided when appropriate and confronted where necessary. Safe people neither relish conflict nor run from it. I like to say that safe people are conflict apathetic. They are no more concerned by conflict than by preparing a meal. It’s something that needs to be done from time to time, and it’s something that is best done well.

The Need for Feedback

Safe people need conflict. People who are comfortable in their own skin and are humble know that they’re not perfect, and they’re constantly looking for safe people to push, prod, nudge, and needle them in directions that are helpful to their growth as humans. Safe people eat feedback for breakfast. Unsafe people run from feedback. Feedback is often in conflict with our perception of ourselves. (See Change or Die for the ego and its defenses.)

However, conflict shouldn’t be a tool that creates a power differential between people. For most relationships – with the notable exception of parent-child, and manager-employee – relationships should be peer-to-peer. One person shouldn’t wield unnecessary power over another person.

In healthy relationships, people take ownership for their own faults and foibles. (The opposite of Mistakes Were Made.)

There’s a saying in 12-step groups that you’re only as sick as your secrets. However, that really means secrets that no one else knows. You’re expected to share your secrets with a few safe people. These safe people can keep your deepest, darkest secrets, and they won’t share them or gossip about you. That’s real safety. We need to share our secrets to be healthy – but we also need to know that those secrets will remain with the people that we shared them with.

Cloud and Townsend leave off before what I consider to be the most important part of this topic. The book assumes that there’s a completely safe person. It frames the problem in the context of finding the right person to be in a relationship with. I believe this misses a fundamental point. We’re all some degree of safe and some degree of unsafe. None of us are perfect, and we can’t expect that from others. As a result, we need to learn how to be in safe relationships with unsafe people.

Learning how to draw boundaries allows us to prevent an aspect of someone else’s unsafe-ness from harming us. (See Boundaries and Beyond Boundaries for more.) Knowing ourselves and having a stable – but flexible – self-image allows us to weather the storms of conflict and abandonment.

For me, the real mastery isn’t discerning how to find only totally safe people to be in a relationship with, but instead is learning how to become a safe person so that you can attract more Safe People.