Book Review-Thrive: The Third Metric to Redefining Success and Creating a Life of Well-Being, Wisdom, and Wonder 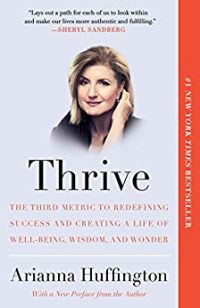 Book Review-Thrive: The Third Metric to Redefining Success and Creating a Life of Well-Being, Wisdom, and Wonder

Sometimes a story of burnout is actually a story of resilience from burnout. Though Arianna Huffington describes her literal collapse and resulting injuries as a mixture of burnout and exhaustion, from the outside, it seems like just exhaustion, not burnout. That’s the opening context for the transformation that led Huffington to write Thrive: The Third Metric to Redefining Success and Creating a Life of Well-Being, Wisdom, and Wonder. The first two metrics are money (wealth) and power. They’re the temple guards of our society and have been with us for what seems like eternity.

What’s Wrong with Wealth and Power

Before getting to Huffington’s new metric, it’s important to acknowledge why it’s even needed in the first place. After all, wealth and power have faithfully served our society for years. The problem is the one that was popularized by Daniel Kahneman in his research in Thinking, Fast and Slow. One problem is that is there never enough wealth and power; the more you have of it, the less it makes you happier. A ten thousand dollar a year raise when you’re making twenty thousand is a big deal. When you’re making two million, ten thousand dollars doesn’t seem like much.

More than that, the pursuit of these two leads us away from caring about others. You’ve heard the saying, “It’s lonely at the top.” That’s not just because there aren’t many people vying for the top spot. In the process of climbing to the peak of wealth and power, you’ve had to let go of friends and colleagues who just can’t make it. To pursue the gods of wealth and power, you have to let go of relationships and people.

If we were to build a balanced scorecard or dashboard for humanity, we might not like the numbers. Our quality of life is on the decline. 40 percent of American workers leave vacation days unused. We deprive ourselves of sleep to the detriment of our emotional intelligence, self-regard, assertiveness, sense of independence, empathy towards others, and more. Individuals rate themselves as more stressed out than ever before – a 10 to 30 percent increase from 1983 to 2009. It’s estimated that 60 to 90 percent of doctor visits are a result of stress-related conditions. Depression in children has increased fivefold from 1930 to 2010.

The list of statistics about how we’re killing ourselves through our fixation on our society and the trappings of our world goes on and on. Not just in Thrive but in other sources as well. Our gross domestic product may be going up, but our quality of life doesn’t seem to be. Something is getting in the way of our well-being.

Burnout as a Cause

I came to Thrive because of work Terri and I are doing to extinguish burnout. In a room of professionals, we ask, “How many of you feel like you’re in some degree of burnout right now?” Some hands shoot up, indicating the severity of their condition, and others slink sheepishly up next to the person’s head, expressing the shame they feel. In the end, somewhere around 20% of the room has raised their hand. When we ask the second question, “How many of you have ever been in some degree of burnout?” nearly every hand is raised. Burnout has become accepted as a thing that happens to you when you work.

Burnout occurs when you feel as if you’re no longer effective. The result is cynicism and exhaustion. However, exhaustion, like in Huffington’s case, isn’t always caused by burnout. Sometimes exhaustion is literally that your body can’t continue. Similarly, while burnout has been statistically linked to later depression, there are many causes of depression other than burnout.

So, while burnout is likely a factor in the decline of our wellbeing, it’s likely not the only cause.

It’s only fair that I share my disagreement about whether burnout was the cause of Huffington’s incident. She describes it as a mixture of exhaustion and burnout, where I’d say it was only exhaustion that drove the collapse. Burnout tends to cause you to feel exhausted before your body actually collapses. Burnout is like the thinking that the human body can’t run a four-minute mile, with the belief in place that no one could. Once the belief is removed, suddenly many people begin to run a four-minute mile. Burnout causes you to stop trying from exhaustion, not collapse.

Certainly, I’m on shaky ground to disagree with someone about their experience. However, I’d say that burnout was the specter that Huffington was avoiding. Burnout is feared and avoided – and, at least before this incident, quite successfully. In no way am I trying to minimize the result either the pain from the collapse or the benefit to the world of the renewed perspective on what’s important. I only am careful to develop and maintain clarity around what burnout is so that others can find their way out of it.

It’s tragic to go to school to be a doctor only to become one and realize that it’s not what you thought it was. A decade or two of a life is lost in the pursuit of a rainbow that seems to move every time you get close to it. If you view burnout as the gap between what you expect and what you believe you’re actually doing, it’s easy to see how physicians get burnt out. Most physicians become physicians to make a difference in the world, to help people be healthier. However, they spend too much time with paperwork. They encounter patients who won’t follow the instructions that will make them healthier.

The day-after-day appointments are monotonous. Physicians don’t see positive results, because the patients don’t come back to tell their doctor, “Thanks, I’m all better now.” The only feedback that physicians get is negative, when the patient says, “That didn’t help.” The systemic message being sent to physicians is that they’re not saving the world, and they’re not even making a difference.

The gap between their expectations of themselves – or maybe their aspirations – and reality are a hard load to bear, and too many are crushed under its weight. The result is hundreds of thousands of dollars in schooling and effort are thrown in the trash bin, as the physicians find another career that doesn’t involve their soul getting crushed every day. Society loses good physicians, and they spend the rest of their lives trying to get out of debt.

One of the largest gaps in our behaviors that lead to burnout is simple. It’s the absolute insistence on taking time for self-care. This isn’t just time for oneself to watch a TV show – though it can be. It’s about finding time for the activities that both physically and mentally prepare you to be stronger. Physically, it can be managing diet, proper hydration, or enough sleep. In fact, proper sleep can improve professional athletic performance – so it follows it should help the rest of us, too. Mentally, it can be meditation, yoga, or simply peacefully wandering through the woods. In our overcommitted world, we all too often refuse to protect our time and insist that the time we need for us is not a nice-to-have but a necessity.

This often comes from our awareness that we can survive without a little bit of self-care for a while. We know our own needs and our own capacities better than other people, so we can evaluate and say that we are capable of the sacrifice – however, we don’t know if someone else might be more capable, or if the value someone will get from our sacrifice will be worth it. The trap is that we often forget that we’re agreeing to make a short-term sacrifice, and we continue to sacrifice self-care for too long. Sometimes, the most positive thing we can do is take care of ourselves.

For most folks, it’s hard to consider the number of positive thoughts we’re having compared to the negative ones. It’s not something that’s easy to measure – unless you have someone willing to interrupt you randomly and ask you whether you’re thinking positively or negatively. Many professionals struggle to understand their feelings. Most of us grew up in homes where feelings weren’t talked about much or weren’t safe. We were told that we should bring our emotions to work. However, more and more we’re seeing that we need to remain integrated with both our thinking and our feeling

Having an Emotional Relationship with Ourselves

My favorite mental model of all time is the Rider-Elephant-Path model (see Switch and The Happiness Hypothesis for more). Fundamentally, it’s the same as Daniel Kahneman’s System 1 and System 2 thinking from Thinking, Fast and Slow. The model has our rationality as the rider sitting on top of a large emotional elephant – who is the real one in charge. This is powerful in its own right; however, there’s a subtlety about the relationship between our rationality and our emotions that is easy to miss. We don’t often think much about the relationship between our rational brain and our emotions.

The more that we can create this trust, the more we move towards the opportunity to thrive in a whole and fulfilling way.

Something’s upside down. The so called “leisure class,” those who have more money and resources, are working longer hours and taking less time for leisure than the so called “working class.” In the pursuit of money, power, and just stuff, the leisure class is literally killing themselves by working so hard. They’re filled with stress and turmoil that the working class doesn’t have.

The heart of this inversion is the lack of need by the “working class” to prove their power or status, and, as a result, they don’t stress over it. Certainly, there is a portion of this group of people who are living hand-to-mouth who have other stresses, but, by and large, the “working class” isn’t working as much, and they’re not staying in such constant stress.

Stress is a useful biological technique that us humans have coopted for purposes it wasn’t designed for. Instead of the momentary stress of a lion in the plains of Africa, we have the constant looming of our businesses failing, failing to pay our mortgage, and that impending fight with our family. It would be difficult to overstate the potential negative impacts of stress in our lives. I’ve written a three-part summary of Robert Sapolsky’s book Why Zebras Don’t Get Ulcers that covers the physical impacts, the psychological and neurological impacts, and the causes and cures. The shortest version is that it’s very bad. (Profound, eh?)

The trick to stress, however, isn’t the stress itself but how we manage the stressors. That is, how we manage our response. By choosing our response to the stressors that do have to happen to us so that they’re less impactful and by working on strategies to minimize the number of stressors in our lives, we can dramatically reduce the amount of felt stress that we have.

Because stress is our adaptation of an evolutionary trick that we’ve coopted, we can change the way that we view it – and eliminate (or reduce) the negative long-term impacts.

PrevPreviousBook Review-The Book of Joy: Lasting Happiness in a Changing World
NextPaging 1, 2, 3Next