Book Review-Immunity to Change: How to Overcome It and Unlock the Potential in Yourself and Your Organization

Home Book Review Leadership Book Review-Immunity to Change: How to Overcome It and Unlock the Potential in Yourself and Your Organization 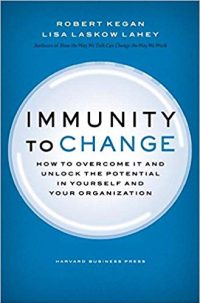 Book Review-Immunity to Change: How to Overcome It and Unlock the Potential in Yourself and Your Organization

Why is change so hard? Whether we’re trying to change a culture, a team, or ourselves, change is hard. The core answer from Immunity to Change: How to Overcome It and Unlock the Potential in Yourself and Your Organization is that change is hard precisely because it’s designed to be hard. We’ve developed a resistance or an immunity to change to protect ourselves from unnecessary, too frequent, or too extreme changes. The result is a natural immunity to change. While this serves us well in most circumstances, some of the most difficult challenges in our lives are changes we want to make, desperately need to make, and for which our immunity has activated to prevent our best efforts to change.

Should I Change or Should I Die?

It seems like an easy answer: we should change. However, as Change or Die points out, 90% of cardiac patients don’t make the recommended lifestyle changes even after a heart attack. Criminal recidivism rates exceed 67.5% in just three years. Even after their freedom has been taken away, criminals don’t change their behaviors. The question becomes why is this? What is it that allows someone to put themselves in danger of death when their stated goals are to live?

Each year, millions of Americans make New Year’s resolutions. Six weeks later, very few people are still working towards their resolution. They’ve made a rational decision about what they want – but they’re not doing it. The most common resolution is to lose weight. The health benefits in a nation of predominantly overweight and clinically obese people are obvious. No one is confused that there are long-term health issues that are substantially influenced by being overweight. The research around this isn’t changing.

What does change are the hidden goals that can’t be articulated. You can chalk the problem up to a Rider-Elephant-Path problem, where the rider makes a rational decision, but the emotional elephant isn’t going to do that. (See The Happiness Hypothesis for more on this model.) You could say that it’s just too hard – but the relative challenges of weight loss are well known. It’s even well known that most people fail in the long term, returning to weights that are 107% of where they started. There’s a hidden goal of protecting our self-image of the person we see ourselves as – and not changing it even if ostensibly we have a goal to change.

What if all challenges could be broken down into just two categories? One category of challenges is technical. That is, once you know the solution, you can use it every time to solve the same problem. It’s simple cause and effect, problem and solution. In this model, you need only know what the solution is and execute it to solve the problem.

The second kind of challenge is an adaptive challenge. The challenge is constantly adapting and changing as you try to solve it. This is what might also be called a “wicked problem” by Horst Rittel. (See Dialogue Mapping for more.) Behavior change lives in this space where not all the components are known – or even can be known. The process for changing behavior through Immunity to Change is one that seeks to illuminate the dark places of tacit knowledge and beliefs and seeks to make them more explicit. (See Lost Knowledge for the distinction between tacit and explicit knowledge.)

Our immunity to change comes from our deep-seated and hidden expectations, perspectives, and commitments that keep us trapped in where we are and what we believe despite our conscious desires to change. We want to be better as a leader but can’t let go of tasks that others could do quicker and better than us, because we need to feel like we’re “hands on” and are really contributing value.

The problem is often that we’ve not had a chance to really understand ourselves. We spend our time rushing from one thing to another, barely pausing to consider whether what we’re doing is what we want to be doing or is consistent with the way that we see ourselves. (See How to Be Yourself for more on this.) In our dealing with other people, our lack of understanding of ourselves shows itself. In my reviews of Dialogue, I wrote about the inner game of dialogue. I spoke about how our internal views and perspectives leak out everywhere, even in our attempts to dialogue with one another.

Immunity to Change focuses on the idea of an X-RAY that has four columns, which provide a view of why the conflict exists and why it’s not a simple technical fix to resolve the issue. The columns are:

An Everyone Culture, a book I’ve previously reviewed by Robert Kegan that was published after Immunity to Change, adds one additional bit to column 3. That is a worry box. It’s what you’re worried about – as a prompt to help you better articulate what is holding you back. If you can walk through these four columns and get clear the idea is that you’ll know how to change.

Sometimes, when people begin a journey of growth, they become overwhelmed with the opportunities for improvement. It’s important to recognize that we don’t have to grow or change in every area all at once. The reality is that most people’s success is inhibited by one or two key skills You don’t have to be great at them, you need only to reach a level of minimum competency.

In The ONE Thing, Gary Keller tries to lead us to focusing on just one thing but, in doing so, acknowledges that we may need to have one thing in multiple areas of our lives. The goal is not to drive that one thing – in each area – to the point of being excellent. All that is necessary is that we reach competency.

In fact, Benjamin Franklin, who was famous for many things including his productivity, tried to push himself sequentially to develop a set of virtues. He found each time he focused on another virtue, one of the ones he believed he had mastered faltered. (See Primal Leadership.)

We cannot be best in everything, but we can sequentially try to improve ourselves. Though we may experience periodic setbacks – like Franklin – in the end, we’ll find that, if we just work on one thing at a time, just to the level of competency, we’ll keep improving ourselves, and we may even find that we like ourselves.

If we’re really good at continuously challenging our immunity to change, and we continue to work on our ability to change – to overcome our Immunity to Change – we may just find that we like ourselves. It could even be enough to say that you have no regrets – because you like the person you are, and everything you’ve done has led you up to this point.