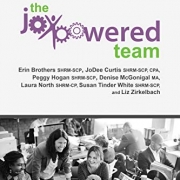 Sometimes, I get to know some truly amazing people. I get to spend time with other speakers and authors who have messages to share with the world. One of the people I’m privileged to know is JoDee Curtis and her team at Purple Ink. The latest book that she and her team wrote is The JoyPowered™ Team. Like the heroes of The Justice League, the team works best together – in this case, as they shared the work of writing the book.

Everyone has a personality – obviously. What is less obvious, perhaps, is that a team has a personality. Surely, the organization it fits in has a personality, too. The team personality is formed not just through the individuals that make up the team but also in the way that the team members interact with one another and how they set their goals and fundamental values. Teams, it turns out, can have as rich of a personality as a person.

The amorphous nature of the team means that, invariably, new people will join, and a few people will leave. These changes will cause the personality of the team to shift – but, in most cases, not radically change. Perhaps the most iconic example of how a team can change and remain the same is found in the experience of the band Van Halen. A band is a team by every definition imaginable. (See Collaborative Intelligence for more on defining teams.)

Van Halen, over its very successful career, has had three different lead vocalists and three bassists. Despite this, the band is fundamentally the same band. Eddie Van Halen, who plays lead guitar and sometimes performs vocals, as well as the drummer, Alex Van Halen (Eddie’s brother), held the group together even as some members changed. This allowed fans to know (mostly) what they would get.

Knowing What You’re Getting Into

Everyone has had the experience of wondering what they’re getting themselves into. Every employer is looking for a good candidate, and every candidate is looking for a good employer. While employers look at candidate resumes and call references, candidates check out the company website and sites like GlassDoor.com. Even with all the information that candidates have available today, it’s sometimes hard to understand what the personality of the team is from the outside. The company itself can be fundamentally sound, but the team the candidate is joining may be led by a poor manager.

A truism of human resources is that candidates join companies and employees leave bosses. That’s even more reason for candidates to interview their new potential boss to understand how they work. It’s also why managers who want to excel in their career need to study how to develop employees. No one wants to be the manager that no one wants to work for, because eventually that will be discovered, and it may be enough reason to encourage them to find opportunities outside the organization.

Not all the reasons why managers and employees don’t get along can be chalked up to poor management. There’s also the issue of fit. Does the candidate have the right skills and temperament to be effective at the role they’re being asked to fulfil? In some cases, job descriptions are just placeholders. They’re something that HR requires – rather than a fully thought-out plan for how someone new can plug in and make a difference to the organization.

I believe strongly in healthy conflict. Conflict isn’t good or bad. How conflict is handled can be good or bad. I’ve been a troublemaker my entire career. I’m conflict apathetic, and so the conflict avoidant personalities are concerned about me. I’m also capable of holding my own in a disagreement, so the conflict initiators are wary of me, because they’re not sure whether I’ll engage or not. It’s because I’m so open and apathetic to conflict that I rarely decide to keep thoughts to myself rather than finding a healthy way to express them.

However, many team members will have reasons to be fearful and that fear will prevent them from speaking up when they need to – for their sake and for the sake of the organization. (See The Fearless Organization.) It’s about getting into it – not about getting over it. We need to make it safe for people to express themselves in disagreements where possible, because it’s critical that we hear every voice.

Diversity and inclusion are very important today. It should have been very important before now, because we’ve known that diversity can greatly improve the kinds of solutions that teams come up with. (See The Difference for more.) Erin Brothers makes a statement, “One person can’t be ‘diverse!'” But I disagree. Walt Whitman wrote, “Do I contradict myself? / Very well then I contradict myself, / (I am large, I contain multitudes).”

In my post “Diversity and Inclusion Start with Acceptance and Appreciation,” I explain how I view the challenge of diversity and inclusion today. I explain how I’m rather pathologically incapable of seeing most differences – and I’m grateful for it.

I can’t leave the topic of diversity without repeating the quote from Verna Myers: “Diversity is being invited to the party; inclusion is being asked to dance.” We need different points of view fueled by different experiences. However, we need to find ways to engage and test those different points of view. It’s one thing to hear the crazy ideas. It’s quite another to do something to test them.

Jenn Lim, the CEO of Delivering Happiness says, “Strategy is the thinking, brand is the talking, and culture is the doing.” These are three important components to a successful organization. We need strategy like we need a rudder on a ship to steer us to the right port. We need a brand that communicates a core message about our value or our values. It’s what we print on the sail of the ship to inspire us and communicate our value. It’s in our culture that we make the decision to set sail and go somewhere.

The best strategy with the most articulate branding can fall short if the culture of the organization is unwilling or unable to go where these two lead.

Making of a Team

Teams are fundamentally built on trust. We must trust one another to be effective. (See Trust => Vulnerability => Intimacy, Revisited for more on trust.) Our incentives must be aligned so that the teams aren’t rewarded individually but are instead rewarded collectively. When we goal people, individually no matter how much desire they have to be a team, they’ll invariably revert to their individual goals over the team.

The rebel that I am is the exception. I was led a team of developers many years ago, and I had a personal utilization goal – I was within a whisper of reaching the goal. I had two members on my team that were close as well and that we made better margin on. I gave work to them that I could have easily done myself to get my bonus. Instead, they both got their utilization bonuses, and, as a team, we exceeded our profitability goals. The organization didn’t pay me my bonus, but that was OK.

Managing expectations in a team can be hard. You want to do everything and at some level realize that “everything” just isn’t realistic. In Extinguish Burnout, we speak about the gap between productivity and expectations and how this can drive burnout. Managing expectations on a team comes in two parts. The first part is an aspirational goal that everyone wants to hit. The second part is the minimum goal that must be hit. These two goals are powerful because they allow for expansion to the greatest capacity of the team and simultaneously protect the team from feeling like they are never able to meet their goals.

If you can’t meet your goals as a team even if you’re focused on strengths, it may be difficult to find your way to becoming The JoyPowered™ Team.