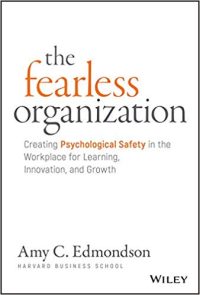 What places strike fear in your heart? It is walking into a graveyard – even during the day? Perhaps there’s a sense of foreboding as you drive past a place where you saw a horrendous wreck. Maybe you get the heebie-jeebies when you walk into the principal’s office to talk about your child, because you remember getting called into the principal’s office as a child. Should any of these places make you feel uncomfortable or fearful? Maybe not, but it doesn’t change the feeling.

In my post Trust => Vulnerability => Intimacy, I explain that trust is a gift. It’s not a matter of being trustworthy – it’s a matter of someone deciding that trusting is the right thing to do. They’ve accepted a level of vulnerability on the chance that it will work out better for them. There are no guarantees, only hope that trusting will create better results.

We can – and should – make it easier for folks to trust by being worthy of trust. But, at the same time, we must recognize that fear comes from deep within, and sometimes it bears little resemblance to the actual facts of the situation.

Fear Beyond the Walls

In many cases, the fear that exists in the mind of employees doesn’t even originate inside the walls of the organization. It may be something they “caught” from their family of origin from their dad being laid off, turning their world upside down. It might be from the judgmental voices they expect to hear if they once spoke up and were fired because of it. In America’s Generations, Chuck Underwood speaks to the differing views that generations have to things like job stability and how our parents may have been more – or less – fearful for their jobs.

Too many people today live paycheck to paycheck. If they lose their job, it is a serious financial hardship that can have devastating effects. It’s easy to not be afraid when you’re secure – if you don’t need the job so it doesn’t matter. It’s quite a different thing if your family won’t eat in a week if you don’t keep the job. The fear level rises, and it’s outside of whatever may be happening in the organization.

Too many of us have heard us or our colleagues say “I have kids in college” when asked why they’re not speaking up. On the surface, this makes no sense. Kids in college has nothing to do with making a suggestion in a meeting. However, at a deeper, fear-based level, it makes perfect sense. They’re supporting their children through an expensive time, and if they lose their job, they won’t be able to do that. The fear extends beyond financial to their ability to provide for their children and even their identity. It’s a truth that pierces the very essence of their situation.

Fear of losing a job is present even when it makes no rational sense. The average tenure of the organization can be measured in decades (as it is for one of my clients). It’s possible that no one in the history of the organization has been fired – or at least fired for bringing up controversial ideas. However, that reality doesn’t matter. There’s still a part of the person who worries whether their idea or comment or suggestion will be the reason the organization breaks the trend.

Fear Inside the Walls

It’s been a stressful day. The news is there are new regulations that will hurt the business, and everyone’s jumpy. Jane makes an innocent mistake that costs the company a few thousand dollars. Under normal circumstances, it’s not even enough to raise an eyebrow. While mistakes aren’t desired, they’re understood. However, today isn’t an ordinary day. Sam berates Jane only for a moment before catching himself. The entire room stares at him in disbelief. He’s made a scene. He’s made a mark.

The problem with creating an organization full of psychological safety is that psychological safety is, fundamentally, trust – and the trust has been broken. Trust itself is a funny thing. It’s built over a lifetime and crushed in a second. Sam’s outburst will have far-ranging impacts on the perceived safety in the organization for years to come. Even if others can’t articulate it, they’ll feel a bit less likely to speak up the next time they have an idea. They’ll be a little less willing to take a risk, and the company will suffer for it.

The real problem is you can’t truly prevent every possible way that trust and safety will be violated. You can – and should – work towards lower levels of incidence, but, at some level, mistakes – including those made by managers – are to be expected. Instead of trying to prevent all failures, you’ve got to switch to a strategy that works on resilience and recovery rather than planning and prevention.

Fear is a natural part of life, whether we like it or not. It takes courage to overcome our fears and move forward. Courage is, in fact, that idea. Courage is not the absence of fear but rather moving forward in the presence of fear. (For more on courage, see Find Your Courage.) While Edmonson focuses on psychological safety, there’s a truth that nothing is completely safe, and therefore courage is required. There will always be some fear lurking around in the dark recesses of our mind, and courage helps us get past them.

It’s not that creating a workplace of psychological safety isn’t a good, noble, and necessary goal. It’s that it’s insufficient. What you do by creating a place of psychological safety is reduce the need for courage, not eliminate it. On the one hand, the idea is to increase safety and therefore reduce fear. On the other hand, we must accept that even objective safety can’t quell the need for courage to overcome whatever fear remains.

The role of safety in learning is multi-layered. There’s plenty of research on children who struggle to learn in school because the conditions of their home life are challenging. Programs like free and reduced lunches, before school breakfast programs, and a host of others are designed to mitigate the impacts of these extra-school challenges to learning. However, they’re not able to eliminate the factors. One of the biggest factors that these programs have a hard time mitigating is the fear that is felt by students. They know they’ll be fed at school, so there’s some level of knowing that they will have some food, but they don’t know whether they’ll have a place to live or whether there will be a life-threatening fight that night.

Most employees won’t face this level of fear in their organization, but fear still depresses some capacity for learning. Edmonson makes the distinction between learning activities that are done alone and those that are group learning. The learning activities that are done alone are relatively undisturbed by the lack of psychological safety, where those which require group interaction are substantially more depressed – presumably because the increase in interpersonal risk and the fear associated with it.

Learning is an invisible act. You can’t see it happening. It’s difficult to measure, as the measurement interferes with the learning process itself. While learning is a positive invisible act, there are many invisible acts that aren’t positive. Every time someone fails to speak up, it’s invisible, and quite often it means less value for the organization.

The unfortunate reality of organizations with low psychological safety isn’t that they report more problems than their comparison organizations – they often report much fewer. The problem is that the act of not saying what you think, not reporting a problem, and not taking a risk is invisible. While failure is seen, not trying is hard to find.

Failure Is Inevitable If You Try

Many years ago, a friend of mine told me that she admired me, because everything I did just worked. From her point of view, I had no failures. From my point of view, I’ve got all sorts of them. For instance, there’s my $2,000 mistake ordering lights from China. I make mistakes every day. I’ve got a long list of failures. My only secret, if there is one, is that I keep my failures from becoming fatal.

It’s not that I like failures or that I look for them. I am not “pro failure,” I’m “pro learning” and even “pro trying.” I’d rather try and fail than not try. That’s a fundamental shift. Some folks are so afraid of failure that they’re unwilling to risk it. However, I’m so afraid of not trying that I can’t imagine not risking it. In the long run, I know that taking risks will yield better rewards, assuming I can survive and keep taking reasonable risks.

In the end, psychological safety in any organization is minimizing the fear people have, so it’s easier to be courageous. The reduced stress means that they’ll live better lives, and we’ll get better results. (See Why Zebras Don’t Get Ulcers for stress’ impact on the person, and Drive for its impact on the organization.)

If you’re interested in better lives and better organization performance, maybe the starting point is creating The Fearless Organization.