Book Review-Delinquent Boys: The Culture of the Gang 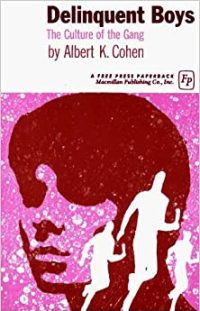 Book Review-Delinquent Boys: The Culture of the Gang

How is it that one boy becomes a Boy Scout Eagle Scout and the other finds their way into a criminal gang?  This is the fundamental question that Delinquent Boys: The Culture of the Gang seeks to answer.  Parents of children wonder these questions before their children grow up and after their children have sorted their ways into different paths.  Other, more contemporary works, like those of Judith Rich Harris in No Two Alike and The Nurture Assumption, have described their view on the sorting process.  It was Ronald Marris’ Social Forces in Urban Suicide that caused me to pick up the book (published in 1955) to see what we might have lost in our understanding of how people end up dedicating their life to a disruptive counter-culture – and how others do not.

Delinquency is, at its core, counter cultural.  It eschews the standards of “social convention.”  (See Choosing Civility, The Righteous Mind, and Trust: Human Nature and the Reconstitution of Social Order for more about social conventions and their influence.)  Cohen in Delinquent Boys describes the subculture as “non-utilitarian, malicious, and negativistic.”  That is, the behaviors seem to have no utility, are seen by the traditional culture as malicious, and generally have a negative view.

In so much as delinquency is counter-cultural and malicious it is seen by most as amoral.  (See The Righteous Mind and Moral Disengagement for more on morality.)  However, it would be more accurate to say that it operates on a different set of moral values.

The Desire for Status

Delinquents have not or cannot find status in the traditional culture.  They don’t fall into a category or class that has the kind of recognition and status that they desire.  They’re not the jocks.  They’re not the nerds.  They’re not the kind of kids that go to college.  Their frustrated attempts to find a way to achieve status leads them to a group where their willingness to be malicious is enough to earn them that status.  (See Who Am I? and The Normal Personality for more about 16 different motivators, including status.)

In this context, rules aren’t just to be ignored or even evaded.  Rules are to be flouted.  It’s the fact that they’re willing to openly defy rules that creates their status in the eyes of others.  Being just ornery is ordinary; they’ve got to do something to stand out from their delinquent friends.

Another characteristic of delinquents is their prepotency of short-run hedonism.  That is, they are focused on their current desires for pleasures with little interest in long-term consequences.  (See The Time Paradox for more on different ways of viewing time.)  This can easily be caused by a lack of belief that they’ll be able to reap the rewards of any long-term planning.  For those who have had too many adverse childhood experiences (ACEs), it may be difficult for them to see the stability necessary for long-term rewards.  (See How Children Succeed for more on ACEs.)

Let’s cut to the chase.  What are they thinking?  That’s what everyone wants to know.  There isn’t a single answer but instead there are a few generalizations that we can make.

First, their sense of self-esteem is unstable.  That is, they’re always struggling for status and approval.  Because of this, when their self-esteem is threatened, their ego’s defenses are automatically engaged.  (See Change or Die for more about The Ego and Its Defenses.)  A typical reaction is anger.  Anger, in Eastern traditions, is disappointment directed.  Disappointment is a judgement of something that missed the prediction or the standard.  (You can find more about this in my post, Conflict: Anger.)

However, anger isn’t the only outward sign of the struggle to maintain the façade of a positive self-esteem.  I explained in my post How to Be Yourself how projecting one image is difficult to maintain, like holding a gallon of milk out to your side.  Coupled with an inability to admit vulnerability, this creates a situation where the “boy” continuously struggles to be or do something that isn’t naturally possible.

While Delinquent Boys put on the airs of being immune to the kinds of hurts that others readily acknowledge, the truth is that they are often cut more deeply by them.  They believe that showing reaction to these hurts means they’re weak, and their culture won’t accept that.  We know that, for physical healing to occur, we need to provide the right conditions.  In many cases, that means either avoiding use or specifically targeting use of the injured part of our body.  We apply casts and define exercise regimens.  However, in the case of the hurts that occur in the Delinquent Boys, they can’t acknowledge the hurts or shape the way they move forward and grow.  (See Antifragile for more about how to recover better from hurts.)

It is a common game.  Red teams are the aggressors, and blue teams are the defenders.  Whether the game is one of cyberwarfare or not, the teams are set up in direct conflict, and Richard Hackman’s work says that the red teams – whether they are less experienced or not – are more likely to be successful.  In Collaborative Intelligence, he explains both the situational and team dynamics that influence the success of each group.  Red teams are effective in part because they define themselves with an objective, where blue teams can only define themselves by not failing.  It turns out that defining yourself with what you’re not isn’t effective.

What does a motorcycle manufacturer with a poor track record in just about every aspect that one would want in a motorcycle company do to salvage its business?  Associate its brand with a culture of rebels.  Our desire to address under-addressed aspects of our personality is a powerful force.  Accountants and businessmen wanted to express their inner rebel, and Harley Davidson was there to help them do just that.  Instead of fixing reliability, they fixed their image in everyone’s mind that to own a Harley Davidson was to signal to the rest of the world that you’re a rebel.

The problem is that while “rebel” can be a part of your personality, it fails as a core part of a personality.  Being contrary to just be contrary doesn’t work in the long run.  You can’t anchor your identity to the idea of having no anchors.  So, Delinquent Boys are left adrift without anything to hold on to.

A counselor once told me that you could tell when someone wasn’t saying anything real by counting the number of “nots” in their conversation.  Broadening this slightly to include other forms of negation, I realized that when someone says they want something, but they keep explaining it by providing negative examples, they either don’t clearly understand what it is they want – or they’re actively trying to prevent the person who they’re talking to from getting there.  This subtle form of manipulation is shame-inducing.

The person who is receiving the negative-laden explanation has no model to work from and therefore must continue trying random (or semi-random) approaches to address the need – only to be told that this, too, isn’t right.  The result is often demoralization and the feeling that you’ll never get things right.  In fact, in some cases this may be the point.

This is just one example of how trying to define in the negative doesn’t work – whether it’s intentional manipulation or simply because of attempts to define oneself by what we are not.

Unique – But Not Too Unique (Optimal Distinctiveness Theory)

We have inherent need to be accepted by others.  It’s wired into our evolution.  Jonathan Haidt, in The Righteous Mind, explains that we survived to become the dominant biomass on the planet not from strength but from our ability to be social.  We know that when we’re standing on our own – rather than as a part of a group – we’re at substantially greater risk.  In historic times, being expelled from a community was likely a death sentence.  Individually, we’re weak.  Together, we’re strong, and that leads to our strong desire to be accepted by others.  However, that’s not the only force deep in our psyche that struggles to bubble up into our feelings, beliefs, and behaviors.

The other engine that drives us is our need for uniqueness.  We believe that we must be different – and ideally better—than others.  We don’t want to feel like we could be replaced by someone else.  That’s why it stings to hear that a former employer or a former lover has replaced you too quickly.  It’s the loss of our feelings of uniqueness.  However, uniqueness requires difference – and too much difference means that we can’t be accepted.

We know that people accept others that are like themselves.  If you become too different, and distinguishable from them, you threaten the ability to be accepted.  The result is that we try to find the narrow path between acceptance and uniqueness.  This has been called “optimal distinctiveness.”

The key problem with optimal distinctiveness is that it necessitates that the problem is a wicked problem.  No two people will define the need for and the appropriate degree of individualization the same way.  (See Dialogue Mapping for more.)  Ultimately, there is no solution to how to be optimally unique and at the same time conforming.  It’s one of the key challenges of life for all of us.

It was Columbine High School in Columbine, Colorado.  It ignited a series of school shooting massacres.  It was also not the first time the perpetrators had made themselves known as delinquents.  Eric Harris’ blog had detailed his interest in harming others and some of his escapades with Dylan Klebold.  Both pled guilty to felony theft and were sent to a juvenile diversion program.  That was 16 months before the massacre.

Numerous others have followed in Eric and Dylan’s infamous footsteps, and more than we know have tried and were thwarted.  No Easy Answers walks through the Columbine Massacre and seeks to help us understand how bullying and a desire to feel strong created a situation that left Eric and Dylan believing their only option was to become powerful through a massacre.

Delinquents have gotten quite fully into what Leadership and Self-Deception and The Anatomy of Peace would describe as a box.  Inside the box, people’s vulnerability drives them to behaviors that are inconsistent with their beliefs and harmful to others.  Eric and Dylan weren’t from bad families.  On the outside, their values would seem to be that of any other child.  However, it turns out that they found ways to do the unspeakable.  They managed to disengage their morality.  (See Moral Disengagement for more.)

Following the Columbine Massacre, both Eric and Dylan were vilified, a reasonable response to people having lost their children or friends as a result of the rage.  What they didn’t effectively do is ask what conditions were in place which allowed these boys to become this way.  Certainly, there is the role of the parents, the community, and the school.  However, what about the environment is key such that so many copycats have followed them?  Perhaps it’s their feelings of shame at the hands of unchecked bullies.  Perhaps it’s something else.

We know that people resist accepting the blame for the situations that they create.  Delinquent Boys are no exception.  Without granting innocence or shifting the blame, how can we look back into their past to see what conditions preceded their delinquency?  Maybe you can find the answer in a nearly 70-year-old book about Delinquent Boys.

PrevPreviousBook Review-No Easy Answers: The Truth Behind Death at Columbine High School
NextBook Review-The Art of Insubordination: How to Dissent and Defy EffectivelyNext