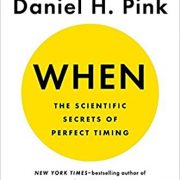 There are plenty of stories of people who were in the right place at the right time, and they struck it rich. They bought into Facebook or they decided to start an e-commerce empire at just the right time. The same can be said for colossal failures. Indiana, the state where I live, invested in canals as the railroad was revolutionizing the transportation industry and went bankrupt because of it. Clearly, knowing when to do something – and when to not do it – has a high degree of inherent value. This is the question that When: The Scientific Secrets of Perfect Timing sets out to solve – sort of.

I was excited as I read that Daniel Pink was writing a book titled When. I’ve been a fan of his writing since reading Drive. Perhaps he could unlock the mystery of when some of the long-term initiatives that we’re working on would finally come to fruition. Perhaps he would tell me when to stay the course and when the course leads to nowhere. Jim Collins in Good to Great first exposed me to the idea of the “Stockdale paradox” – open to listening and adjusting and at the same time having unwavering faith. The question has remained since then. How do I know when to “stick to my guns” and when to “adjust to feedback?”

It ticks. Why does it tick? Why do we measure time in small units that click and tick away with regular monotony? Perhaps it’s to provide order to the chaos of life. Perhaps it’s to help us synchronize to one another.

Phillip Zimbardo speaks of five different perspectives on time in The Time Paradox: Past Positive, Past Negative, Present Hedonistic, Present Fatalistic, and Future. These are unique to the human condition. Humans are the only animal that we know of that can project themselves into the future. (See Why Zebras Don’t Get Ulcers for more on this unique capability.) While many plants and animals have their own internal clocks, the human clock seems to be more complicated and adaptable. For instance, Pink explains that the suprachiasmatic nucleus (SCN) is thought to be the regulator of our circadian rhythms – that is, our master clock that keeps us in a 24-hour cycle. This clock isn’t a precise 24-hour cycle. We use external queues to synchronize this clock with our reality around us. That’s why we can use strategies when traveling across time zones to help us more quickly adapt to a new time. Basically, we can enhance the factors that allow us to reset our circadian rhythms.

It’s why some people find it hard to sleep after working in the presence of blue light. Blue light – associated with the middle of the day – suppresses the production of melatonin. Melatonin is a part of the signaling process that helps indicate to us that it’s time to sleep.

Another dimension of how we tell time isn’t in the 24-hour cycle, it’s in the moment to moment measurement of time as it slips through our personal hour glasses. This is a much more complex maneuver designed for more precise measurement of time. As The Rise of Superman explains, the ability to measure time is a coordinated dance that happens between multiple brain regions, and it’s why, during flow, we lose our sense of time. Flow shuts down glucose, and therefore processing, in some of the areas that are used to keep track of time. (See Flow and Finding Flow for more on flow.)

Ultimately, our human experience of time isn’t always connected to the real flow of time past us. Sometimes our internal clocks aren’t in sync. Sometimes they’re off, and sometimes they can get knocked off their timing based on the very helpful state of flow. In the end, however, there’s more to it than synchronization. Some of us are using different clocks altogether.

Are you a morning person or a night owl? Do you personally ascribe to Benjamin Franklin’s “Early to bed, early to rise, makes a man healthy, wealthy, and wise” – or do you prefer to find the quote that drives your life from the monologue of a late-night TV show? As it turns out, there really are morning people and night owls. The morning folks are called “larks” because of their propensity to like the morning. Owls are, of course, more interested in nocturnal living. The “third bird” – which is rarely discussed – is the center of the bell curve, where most of us fit. That is, we neither are up at the crack of dawn nor are we burning the midnight oil. We rise and fall (asleep) in a more moderate range.

It turns out that there’s some degree of shift from one bird to another over time. We tend to become more “lark-ish” as we get older. Some research indicates that we should be moving schooling later in the day, when our children are more alert and at their peak performance. However, we align children to the rhythms of the older adults – and are thereby causing them to not always be at their best.

The “type of bird” that you are influences the best time of day for you to do certain things – and when you shouldn’t.

It’s a tragedy of timing to be the last case a judge has before lunch. The chances for leniency are slim. If you want a parole, you’re not as likely to get it before lunch as you would be right after breakfast or lunch. (See Willpower for more.) The truth is that, in every aspect of life, we have times when we can do great work and times when we drag ourselves through the task. Pink quotes research that says 20% of our variance in performance can be accounted for simply in the alignment or anti-alignment of our natural rhythms. There are times when our brains are tightly keeping reign on the random thoughts and we’re best suited to do analytical tasks and times when we’re more free-wheeling and therefore able to be more creative.

There’s a pattern of peak, trough, and recovery. However, the order of these don’t always occur in the same direction. Some night owls, it appears, experience these as recovery, trough, and then peak. In the peak, analytical tasks are best. The recovery is a place where creativity shines. By knowing how we experience our productivity, we can align what we do to the time of day when we can do it best.

But what should we do in the trough? How do we be productive when our productivity is lowest?

For the most part, we as humans don’t labor in a field through the heat of the day. We’re in air-conditioned offices – or at least air-conditioned cabs of heavy equipment that does the labor that we used to do as humans. As a result, we’re less connected to the strategy that we used to have as a society, where we’d take a midday break to get out of the heat of the sun. However, it seems like having a way to refresh mid-day improves our overall functioning. From making fewer errors to improving our mood, we shouldn’t skip lunch, and we should seriously consider reinstating the kindergarten nap time for adults. Short naps of 20 minutes can substantially enhance performance post-nap. If you can’t take a nap there are five suggestions for a break:

Cognitive diversity – that is, doing different tasks – seems to be helpful, but not nearly as helpful as taking a complete break from work to recharge. Staying disconnected and allowing for the ability to play seems to have a benefit – even when you consider the cost that it takes in time.

Have you ever noticed that you charge into new projects with vigor? As the project gets underway, do you ever feel like you’re torn away from your energy, and you’re stuck in a friction-generating state that makes it harder and harder to move? You’re not alone. Time works across the day and the scale of human alignment, but it also scales to the arbitrary length of a project. The way that we interact with projects has a peculiar pattern.

The pattern is a punctuated one with a spike of activity right at the mid-point of a project. It’s as if we wake up and suddenly realize that we’re halfway through the time we have, and we’re nowhere near where we need to be. Whether the project is two hours, two days, two months, two years, the halfway point seems to be a point where we take stock of where we are and realize we’re coming up short. It’s not the only point in the project where activity and productivity seem larger. It rises again at the end of the project, as there’s an effort to bring things to a close.

One would think that, given this knowledge, you should shorten projects to unreasonable times to make the beginning, middle, and end come quicker. However, there are two issues with this. First, as is discussed in Drive, deadlines are inhibitory to creative solutions. Second, if you make the deadlines truly unreasonable, you run the risk of alienating the project team members.

Adam Alter and Hal Hershfield call one group of active people “9-enders” because their age ends in a 9 – and they’re on a mission to do something before the next decade of their life. They’re more likely to run a marathon – by 48%. They’re the people who have something to prove to themselves about who they are and their ability to get things done.

If you want to get someone to take an action for their future self, you’re better off to hit them at the right time – right before their birthday, or particularly when they’re a 9-ender – to drive behavior. Whether it’s getting healthy or saving for retirement, coming off the back of a temporal landmark makes a marked difference in results. However, there’s another aspect – how our language and time interact – that changes the playing field as well.

Temporally-specific languages – ones where tense is important and expected to be present in all situations – are different from languages where the tense can be inferred – or ignored. The crazy finding is that people who use languages that are strongly temporally-bound tend to see their future selves as someone different and alien to their experience today. As a result, they’re less likely to invest in retirement or work to improve their health.

With languages where time is more fluid and connected, people are more subservient to their future selves. They see the connection between them now and the them of the future. It’s like they ask, “If not now, then when?” When indeed. When can you make time to read about the way that we all see time?