Blog
You are here: Home1 / Blog2 / Professional3 / Adoption and Change4 / Book Review-Conversations of Change: A Guide to Implementing Workplace... 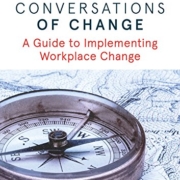 The greatest irony in a book with a title like Conversations of Change: A Guide to Implementing Workplace Change is to realize that there are few – if any – conversations of change really going on. Tucked in the back of this book is a list of the people that Dr. Jen Frahm believes are notable. They’re the leaders who are helping to move change forward. When I followed the URLs in the book, I found about 1/3 of their websites were gone completely. About 1/3 of the people on the list hadn’t posted a blog post in the last year or more. The remaining 1/3 of the sites had at least a moderate level of activity. So much for the conversation. This rate of failure is much higher than I’d expect for a book published less than 4 years ago.

Included in the orientation is some information about models and how methodologies and models aren’t a replacement for wisdom and experience. However, another one of the aspects that Dr. Frahm covers is the players in the change management process, which bears some investigation.

I’m a fan of helping people orient to a space through the development of role charts. I created a role chart for software development and for training development. Here’s Frahm’s list for change (with my definitions/summaries):

One of the most challenging aspects about change is it’s difficult to tell who understands change and who doesn’t. It’s easy to say that you understand change management. It’s harder to prove that you understand how to manage the nuances of numerous sub-disciplines to navigate to safe waters. Here, Frahm quickly talks about certifications before moving on to a pet peeve.

There’s an often-quoted failure rate of 70% for change projects. John Kotter (see Leading Change and The Heart of Change) and Darryl Conner (see Managing at the Speed of Change and Leading at the Edge of Chaos) both use this failure rate as a part of their conversation about change. Frahm argues that the original number of 70% doesn’t have a basis in research. My response is, “duh!” Sorry, I learned a long time ago that if a percentage ends in a zero, there is practically zero chance that it was a research-based number. Research numbers rarely come out so cleanly.

The problem, in my estimation, isn’t whether the original 70% failure rate is research-based but rather whether it’s a reasonable estimate. We learned from Superforecasting and How to Measure Anything that you don’t always have to chase apparent accuracy when you can validate the number is roughly right through other means.

Frahm herself introduces IFOTOB – delivered “In Full, On Time, and On Budget” – as a project management metric. It’s a hard standard for projects, particularly heuristic projects, which invariably change projects are. Heuristic projects have no one definitive path forward, and the solutions are almost never completely understood at their outset. A quick search of research seems to indicate that 70% of all large-scale projects fail to hit all three of these targets. In short, while the number isn’t research-based, it’s reasonable if you’re willing to use a strict standard. It’s generous if you’re going to add “On Value” – meaning the project returned the value it was supposed to return.

Second, agile is about understanding humans and how we work best. We’re solving real problems for real people, and that matters. Finally, software development, like change, is a heuristic problem. There’s no one right way to do things, and there is instead only a path to be found by taking one step, reassessing, and then taking the next step.

RAS and the Resistance

Frahm speaks about our reticular activating system (RAS). It’s the master filter of our brains, and it’s the part of us that controls the difference between sleeping and waking. The RAS can become focused, and the things that are more salient suddenly are raised to conscious more. When you’ve recently purchased a new car, you’ll see that car on the road everywhere, because your RAS is tuned into that particular make and model. (See Got Your Attention? and Change or Die for more on the RAS.)

Frahm is concerned that by looking for resistance, you’ll train your RAS to look for more resistance and it’s all you’ll see. Here, the psychology gets murky, but I believe the thinking is off a bit for two reasons. As Daniel Kahneman explains in Thinking, Fast and Slow, we have a negative bias. In short, we’re going to look for resistance naturally because it’s a threat to our change. Second, the RAS isn’t a one-trick-pony. The RAS can – and does – monitor for anything that is anticipated to be salient. It’s important to look for resistance (see Why People Don’t Resist Change) but also to look for bright spots to get both the good and the bad. (See Switch for more on bright spots.)

One of the best things about the book is that it generally takes a very practical perspective on change, from making a point that change projects with fancy sounding names end up getting very negative nicknames to recognizing that not everyone influences through charisma. (See Nick Morgan’s book Trust Me for more on charisma and authenticity.)

If you want to get a solid framing for change management without academic mumbo-jumbo, it may all start with Conversations of Change.