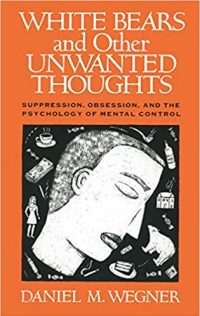 We’ve all had that song we couldn’t get out of our head or that situation we kept playing over and over in our minds.  We’ve had the mental Groundhog Day that some thoughts seem to generate.  White Bears and Other Unwanted Thoughts is a thoughtful walk through the research about what happens when we try to suppress thoughts we don’t want – particularly those that stop, block, or freeze our thinking.

The book, Daniel Wegner explains, isn’t about white bears but is instead about a story of how Tolstoy’s older brother convinced him to stand in a corner until he wasn’t thinking about a white bear.  This, of course, proved difficult.  The more he reminded himself not to think of a white bear, the more he thought of it.  The change is the meta- or abstract idea of not thinking about an object (white bear) requires that you call up the image to understand it, and that, of course, makes you think about it.

Squirrels and other Distractions

For those of us who have seen the Disney/Pixar movie Up, we know Doug the Dog’s obsession with squirrels.  Doug could be distracted by the simple mention of the word – and it would disrupt whatever was happening.  This is disruptive when others use distraction on you, but as an internal tool, it’s a powerful way to shift your thinking from something that you don’t want to think about to something you do.

Where attempts to directly suppress a thought fail, distractions can be a powerful way to shift thinking away from the unwanted thought – if they’re powerful enough.

Walter Mischel tested children with treats (which was simplified by a reporter to marshmallows).  He lays out the entire process in The Marshmallow Test as he explains the accidental implications.  The test was a delayed gratification test, where if the child could leave the sweet for a few minutes while the researcher was out of the room, they would get two treats.  Some kids did, and some did not.

Some of the children most successful in delaying gratification – and reaping the rewards – were those who used distraction.  The least successful children were those who tried to use their willpower to power through.  (See Willpower for more about how it functions.)  The more they tried to directly ignore the treat that was sitting right there, the more they squirmed – and often succumbed to the temptation.

When Mischel returned later to the results of his momentary torture of children, a powerful story emerged.  The story was those children who had effectively delayed their gratification were more successful in life.  It wasn’t that the limits of the cognitive skills they had learned were confined to their preschool; their ability to delay gratification seemed to serve them throughout their life.

Learning how to delay gratification had lifelong implications, and the best way to do that was to master distractions.

When trying to distract yourself from a disastrous date  or a deliverable debacle, people who aren’t depressed are able to call to mind positive distractors.  They think of a date that did go well (even if the other person isn’t in the picture any longer), or a work deliverable that got rave reviews.  A few moments of basking in the glory of a success made the failure seem more mentally and emotionally distant.

However, the research shows that if you’re depressed, you somehow decide that thinking about a different disaster is the right way to distract yourself from the current thought to be avoided.  Instead of recalling something positive, you’ll recall something neutral or negative.  With prompting, you can get a depressed person to see other positive situations, but it’s not the normal response that the rest of us have.

To be fair, those with depression tend to see the world a bit more accurately than those who are not.  They more accurately predict their chances at asking someone out, getting a promotion and so-on.  (See Superforecasting for more.)  However, they’re not as happy about it.  Our happiness, it seems, is built at least partially on delusion – but that’s not necessarily a bad thing.

The Body Keeps the Score created the awareness for me that post-traumatic stress disorder (PTSD) was the result of a situation that the person wasn’t able to fully process.  The situation was so horrendous that people would have to block it out of their mind before the processing could be completed.  The act of suppression seems to not just prevent the situation from processing, it may actually be creating the obsession.

Research seems to support the idea that the more you suppress a thought, the easier it is to recall later.  In other words, every time we suppress a thought, we make it easier for the thought to occur.  The solution is to leverage the reality that we habituate to stimuli, and they become less prominent.  Daniel Kahneman discusses bias, including our desensitization and habituation, in Thinking, Fast and Slow.  Albert Bandura successfully demonstrated this in removing snake phobias, which he discusses briefly in Moral Disengagement.  The trick it seems is to progressively walk through only pieces of the situation to the point where you can still feel safe to help the body understand that there’s no need to be fearful.

Our thinking is like a focused laser that operates on a relatively narrow band of input and processes only a radically small amount of the data available to us.  We’re bombarded by sensory data and, increasingly, information.  We must select a narrow band of that to focus on.  (See Chris Argyris’ Ladder of Inference, which I discuss in my review of Choice Theory.)  Our ability to control our thoughts is primarily about our ability to control the process of focusing our attention on one thing instead of another.

The more that we’re able to direct our thinking towards those things that are important and useful and avoid thinking about those things which are self-defeating or get us stuck into a loop of thinking, the happier and healthier we are.  Of course, Willpower is more often thought of from the perspective of productivity, but it has a role in our sanity as well.

The idea that such a fantastically complex machine like our human brain could run without errors is wishful thinking.  What we know is that we’re constantly discovering and recovering from mental defects.  Most people don’t consider laughter much, but it’s one of those mental repair routines.

Inside Jokes explains that, while there are two types of laughter, one of them is associated with an error checking routine in our heads discovering an error and giving us a bit of dopamine because of it.  The typical joke has the format of step, step, change.  It relies on us making assumptions about what the comedian is talking about and the quick change in the meaning of what we were thinking about.  The result is we’re rewarded for realizing that the meanings were changed.

White Bears and Other Unwanted Thoughts proposes that the ability to distract ourselves is also a mental repair routine which is designed to keep us from becoming locked up on a single concept to the exclusion of everything else.  It also believes that we use humor to escape a situation that seems to have become stuck.

One of my favorite metaphors for the way our brains work is Jonathan Haidt’s Elephant-Rider-Path model that he covers in The Happiness Hypothesis and Dan and Chip Heath picked up in Switch.  It postulates that our reason is the rider on top of a large, emotional elephant.  The rider has the illusion of control, but only until the elephant decides differently.

I’ve been close to people who grew up in environments where emotions were scary and not okay.  The result, in at least one case, was a complete cognitive break when emotions refused to be held back any longer.  That and other situations where suppression of emotions leaked out into other spaces have led me to realize that suppressing emotions is dangerous stuff.

It takes a massive amount of effort on the part of our rational rider to keep such a powerful emotional elephant under control.  When you’re consuming all that mental energy trying to suppress the elephant, there is little left for the rest of life.

Lightning rods are used to direct a lightning strike in a way that prevents damage.  On top of houses, they’re designed to route the lightning down a sizable electrical cable to the ground rather than striking and burning through a house.  One of the effective techniques for distraction is to use lightning rod type thoughts to draw all the attention to something else.

Powerful thoughts – whether due to their importance or the degree to which they’re immersive experiences – can become mental focal point which draw everything in and thus avoid the unwanted thought.

You can’t unhear something, nor can you unsee something.  Whether it’s the critical comment about you made by a friend or colleague or a scene that you shouldn’t see, you can’t get it out of your head.  Once it’s in there, it’s there – no matter what Freud believed.  Though difficult to study directly, there’s every indication that suppressing a thought in any form doesn’t make it disappear.  In fact, there’s evidence to support that even when we believe – rationally – we’re suppressing a thought, we’re not.  We see micro biases start to show up even when the person claims they’re not actually aware of the information consciously any longer.

These subconscious biases drive us more than any of us would care to believe.

Al Campanis defended Jackie Robinson when it would have been easy not to.  Jackie Robinson was the first black baseball player to play in the Major Leagues.  Al Campanis was aware of Jackie’s talents and was (reportedly) a friend.  Al was able to see past the stereotypes of the time with Jackie.  Jackie was different; he was someone Al knew personally and knew that the stereotypes didn’t apply to him.  Except that, while Al knew Jackie was a good ball player, he didn’t believe that blacks could manage a baseball team.  His personal relationship with Jackie wasn’t enough to shake this belief.  (See Mistakes Were Made (But Not By Me) for more on this story.)

For the most part, the way that we break stereotypes is to individualize people and situations from the stereotype.  This addresses the immediate situation and allows us to operate – more or less – without the stereotype for that situation.  Over time and enough situations, it’s possible to cause the stereotype to be invalidated.

Buster Benson explains in Why Are We Yelling? that we need stereotypes because they simplify our processing.  The problem comes when these stereotypes are wrong or are too broadly applied.

One important reminder as we leave is that memory is malleable.  It changes every time we think about something.  We forget that the very act of recalling a memory changes it.  Our perceptions are limited, as The Invisible Gorilla points out.  If we spend too much energy suppressing a thought, we may find that the energy becomes attached to the thought.

We need to be careful when we attempt to suppress White Bears and Other Unwanted Thoughts for fear they may come back with a vengeance.